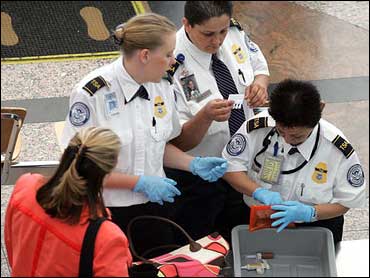 A tip to the Orlando Police Department from an anonymous person led authorities to investigate the men aboard the Delta flight headed for Puerto Rico on Monday afternoon, said Carlos Baixauli, a Miami-based special agent with the U.S. Bureau of Alcohol, Tobacco, Firearms and Explosives. Zabdiel J. Santiago Balaguer was taken off the plane and questioned by security screeners, but released when no weapons or drugs were found on him, court documents said.

Thomas Anthony Munoz, 22, was arrested when he got off the plane at the Luis Munoz Marin International Airport in San Juan. Inside the duffel bag he was carrying, authorities found 13 handguns, one assault rifle and eight clear bags containing a total of 8 pounds of marijuana, Baixauli said.

Balaguer was arrested late Tuesday. Munoz and Balaguer, both of Kissimmee, were charged with conspiracy to distribute marijuana and possessing firearms in interstate commerce during a drug trafficking offense, court documents said.

Balaguer allegedly acted as a middleman between Munoz and a connection in Puerto Rico as part of a weapons and drugs scheme, authorities said.

Balaguer delivered guns and drugs to Puerto Rico several times himself and offered to pay Munoz as much as $5,000 to make the delivery to Puerto Rico, according to court documents.

The man in Puerto Rico had wired more than $1,800 to Balaguer last week, which was used to buy the guns and drugs, according to a federal agent's affidavit.

Balaguer remained in custody Wednesday. It was not clear when Munoz would be transported to the U.S. It also was not known if the connection in Puerto Rico was in custody.

Christopher White, a spokesman for the Transportation Security Administration in Washington, said passengers were not in danger. He declined to address the security breach on the plane.

Both men have been suspended from their jobs pending the investigation, Marx said.