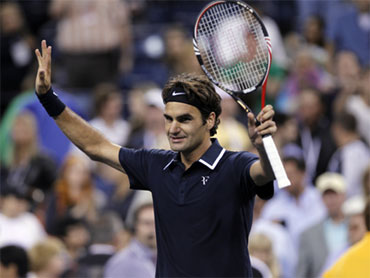 Grit was not going to be enough to get Maria Sharapova through this one. Not with nine double-faults, including three in a row. Not with a total of 36 unforced errors.

And certainly not with No. 1-seeded Caroline Wozniacki of Denmark across the net Monday in the fourth round of the U.S. Open, doing "what she does best," as Sharapova herself put it: getting to nearly every ball and hammering it back, stretching points on and on and on until her opponent misses the mark.

It added up to a 6-3, 6-4 victory for 2009 U.S. Open runner-up Wozniacki over Sharapova, who has failed to make it even as far as the quarterfinals at Flushing Meadows since winning the 2006 title.

"I felt like I was playing well out there," Wozniacki said, then made sure everyone understood a key concept by adding, "I made her do those errors."

Indeed, she did. Rare is the opponent who can trade powerful baseline ground strokes with three-time Grand Slam champion Sharapova and figure out a way to put her on the defensive, but that's exactly what Wozniacki managed to do as early evening shadows crept across the blue court in Arthur Ashe Stadium.

"When she had the opportunity to step in," the 14th-seeded Sharapova said, her voice a barely audible monotone, "she took it and went for her shots."

It's the first victory for Wozniacki in three career meetings against Sharapova, but they hadn't met since 2008. In that time, the 20-year-old Wozniacki has grown as a player and built a huge supply of confidence, thanks to her Grand Slam final debut in New York and, most recently, her 18-1 record since Wimbledon.

"I've improved a lot, not only physically, but also I believe in myself more. I believe I can do it," said Wozniacki, who is ranked No. 2 but received the top seeding at the U.S. Open because No. 1 Serena Williams withdrew. "Also, I think I can mix up my game a little bit more."

Wozniacki has lost only 10 games so far; no one has conceded fewer en route to the U.S. Open quarterfinals since 1999. But here is what might be the most remarkable statistic of all: After making only 10 unforced errors against Sharapova, Wozniacki has made 40 in four matches, and her opponents have made 123.

"Obviously," Sharapova said, "she's at the top of her game."

The 5-foot-3 Cibulkova, a semifinalist at the 2009 French Open, was treated for a left leg problem between sets but still managed to scurry around, covering ground, to improve to 2-8 against top-15 players this season — with both victories against the 11th-seeded Kuznetsova, who double-faulted 10 times Monday.

Asked to assess Wozniacki, Cibulkova said admiringly: "She's really consistent, and she can keep the level that she's playing the whole match."

The other quarterfinal on that side of the draw will be No. 31 Kaia Kanepi of Estonia against No. 7 Vera Zvonareva, who overwhelmed 38th-ranked Andrea Petkovic of Germany 6-1, 6-2 Monday night. Zvonareva, the runner-up at Wimbledon in July, reached the U.S. Open quarterfinals for the first time.

After getting off to a terrible start against the 15th-seeded Wickmayer, Kanepi turned the match around completely, then explained of her play down the stretch, "I was, like, in the zone or something."

Third-seeded Novak Djokovic might have said the same about his own play Monday, when he reached the men's quarterfinals at the U.S. Open for the fourth consecutive year by outclassing No. 19 Mardy Fish 6-3, 6-4, 6-1. Fish's exit leaves one U.S. man in the tournament, No. 20 Sam Querrey, who is in fourth-round action Tuesday against No. 25 Stanislas Wawrinka of Switzerland.

Another quarterfinal will pit five-time U.S. Open champion Roger Federer against No. 5 Robin Soderling, a two-time French Open finalist whose upset of Federer in that round at Paris this year ended his record streak of reaching the semifinals at 23 consecutive Grand Slam tournaments.

Sharapova accumulated eight break points against Wozniacki, but converted only one.

Still, considered one of the toughest competitors on the women's tour, Sharapova rarely departs quietly, and she ratcheted up her trademark, high-octave shrieks right along with her skilled shotmaking Monday.

"I knew that she wasn't going to go away," Wozniacki said. "I knew she was going to hang in there and keep fighting till the end."

Sharapova saved Wozniacki's first match point with a gutsy volley winner while serving at 5-3 in the second set. That was part of some strong net play: Sharapova won 16 of 18 points when she pushed forward, but that efficiency would not suffice.

Sharapova delivered 12 of the match's first 15 winners. But she also was responsible for 12 of the first 15 unforced errors.

When Wozniacki served for the first set, Sharapova held a break point at 30-40, and they played a 24-stroke point that ended with Sharapova pushing a backhand long. Later, on Wozniacki's third set point, there came a 26-stroke exchange that concluded with — yes, that's right — another errant backhand from Sharapova.

"That's great tennis, when there's good rallies. I think it's good for the crowd, as well," Wozniacki said. "It just feels great when you feel like you're hitting the ball right — it's in the middle of your racket. The ball does whatever you want it to do."