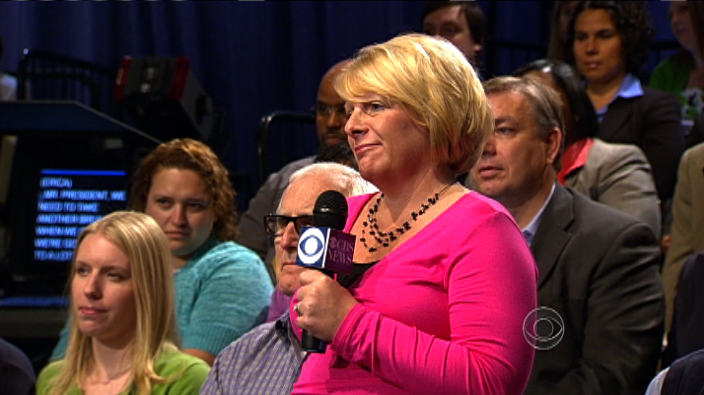 In one of the more personal exchanges from CBS News' town hall with President Obama, one audience member, a pregnant woman who recently found out she was being laid off from her government job, asked the president for some earnest advice: "What would you do, if you were me?"

Karin Gallo, who jokingly described her job at the National Zoo as "non-essential employee number seven," said she had taken a job in government "thinking it was a secure job" - but that now, she feared for her family's future.

"I am seven months pregnant in a high-risk pregnancy, my first pregnancy," Gallo told Mr. Obama. "My husband and I are in the middle of building a house. We're not sure if we're gonna be completely approved. I'm not exactly in a position to waltz right in and do great on interviews, based on my timing with the birth."

"And so, I'm stressed, I'm worried," she continued. "I'm scared about what my future holds. I definitely need a job. And, I just wonder what would you do, if you were me?"

Mr. Obama did not explicitly answer the (seemingly rhetorical) question - but he used Gallo's story as a means to defend government workers.

"Let me just first of all say that workers like you, for the federal, state, and local governments, are so important for our vital services," Mr. Obama said. "And it frustrates me sometimes when people talk about 'government jobs' as if somehow those are worth less than private sector jobs."

"I think the challenge has been that in some of these negotiations to try to reduce the deficit, I think the feeling - particularly on the part of some folks on the other side of the aisle - has been that we want to just cut and cut and cut. And that somehow is gonna create economic growth," he continued.

"Everybody has a tendency to think that somehow government is all waste and if we just sort of got rid of all the waste, well, that somehow we would solve our debt and our deficit," he added.

But Mr. Obama pointed to Gallo's situation as proof that slashing jobs - even government jobs - can't be looked at as an abstract sacrifice.

"These are not abstract questions," he said. "And I think Karin makes it really clear that there are real consequences when we make these decisions."

"Part of my argument is that we're having to make some decisions about cuts to federal programs now, but also states and local governments are making these decisions on programs that often times are doing a lot of good. I mean, these are good things."

The president said that one measure he had taken to limit the extent of government layoffs was implementing a federal pay freeze.

"Some folks were upset" at the move, he noted, but "the reason we did that was so we don't have to cut as many workers as we try to get control of our debt and our deficit."

"The reason the unemployment rate is still as high as it is, in part, is because there have been huge layoffs of government workers at the federal level, at the state level, at the local level," he said. "Teachers, police officers, firefighters, social workers-- they have really taken it in the chin over the last several months. And so, what we're trying to do is to see if we can stabilize the budget."

"I do want to make a larger point to people, though, that folks like Karin provide vital services," Mr. Obama continued. "And so, when we have discussions about how to cut our debt and our deficit in an intelligent way, we have to make sure that we understand this is not just a matter of numbers - these are people."

Even if the president could not explicitly answer Gallo's question, he did appear to take her question to heart.

"My main message to you is that the work you've done at the National Zoo's important," he said. "Every child that you see who comes by and is amazed by those animals, you know, they're benefiting from your work."

Noting that he didn't want to pump her for details about her situation on national television, the president promised to continue the conversation with Gallo after the taping.