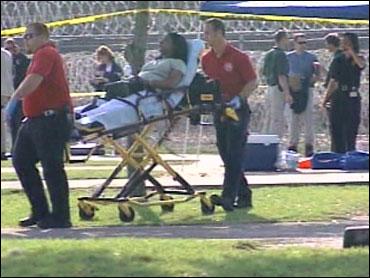 A furious gun battle erupted inside a federal prison Wednesday when a guard opened fire on FBI agents who had come to arrest him and several others on charges of having sex with female inmates in exchange for money, alcohol and pot. Two people were killed and another was wounded.

The dead were the guard and a U.S. Justice Department investigator, according to a law enforcement official speaking on condition of anonymity because of the sensitivity of the situation. A prison employee helping with the arrest was hospitalized.

Six guards in all had been indicted Tuesday in an alleged sex-for-contraband scheme that authorities said went on for two years.

Officials did not release the gunman's identity. But lawyer Tim Jansen said the dead guard was Ralph Hill, his client. The slain Justice Department agent was identified as William "Buddy" Sentner, 44, who formerly worked for the Secret Service before joining the Inspector General's office in 2002. The identity of the survivor was not disclosed, but he was reported in stable condition.

When FBI agents and Justice Department investigators arrived at the prison Wednesday to arrest the men, one of the indicted guards shot a federal correctional officer, said FBI spokesman John Girgenti. He said the officers fired back.

Read The Indictment Against Six Guards

The agents were not expecting the prison guards to be armed, the law enforcement official told the AP, though he could not immediately explain why.

The official said the guard fired with a personal weapon, wounding a Bureau of Prisons employee who was assisting with the arrest. Agents from the Justice Department's Inspector General's office returned fire, killing the guard, the official said, adding that a Justice Department agent was killed in the exchange. It was not immediately clear who fired the fatal shot.

This is the first time an Inspector General agent is believed to have been killed on duty, Justice Department officials said.

An investigation into security lapses at this prison is near certain, with the biggest question regarding the fact that the prison apparently does not screen its employees for guns or other weapons when they enter the facility, reports CBS News correspondent Jim Acosta.

"The community is safe. The institution is in lockdown status," federal Bureau of Prisons spokeswoman Carla Wilson said.

The detention center houses mostly men who are being processed before entering the prison system and is part of the Tallahassee Federal Correctional Institution. A low-security prison for female inmates is next to the detention center. Together the men's and women's units house 1,445 inmates.

Guards are prohibited from bringing personal weapons into prisons but are not screened the way visitors are, Wilson said.

In addition to the sex charges, the guards were accused of threatening to plant contraband in inmates' belongings or have them sent to other institutions farther from their families if they reported the illegal activity.

According to the indictment, the guards showed inmates information about themselves and inmates on the prison computer system to prove that their threats were real. It said the guards switched assignments to arrange trysts with inmates.

The five other guards entered not-guilty pleas in federal court and were scheduled for a bail hearing Thursday.