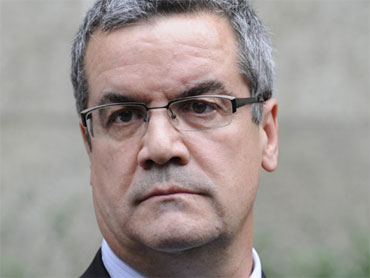 Prosecutors have released transcripts of what they say are secretly-recorded tapes of conversations between lawyers for David Letterman and Robert "Joe" Halderman, the veteran CBS News producer accused of trying to shake down the comic for $2 million.

The transcripts have Halderman voicing fears Letterman would go to great extremes to get revenge.

Prosecutors contend Halderman threatened to go public with word of affairs Letterman had had with staffers of his show if the late-night host didn't give Halderman the money. Halderman insists he was just shopping around a screenplay about Letterman's life.

His attorneys told CBS News again on Tuesday that Halderman was trying to negotiate a business deal, on the on the right side of law.

Halderman is seeking the dismissal of the attempted grand larceny case against him.

On Oct. 1, Letterman made the shocking revelation on "Late Night with David Letterman" that he'd had sex with staffers, and that he was the target of the extortion plot.

"I'm not sure how crazy this guy is, or um, how dangerous he might be," Halderman said of Letterman. " ... Should I be fired, mysteriously ... if my house burns down ... any number of things that... I have no idea who or what he is or is capable of."

Halderman also warned he was going to keep copies of everything he had on Letterman, for protection, saying, "The only way to be sure that I never talk to anybody is for somebody to kill me. Well, you know, I don't want that to happen."

Prosecutors insist the tapes prove Halderman was up to no good. In a statement, Letterman's lawyers say, "Once again, the DA (district attorney) has effectively outlined the compelling evidence of this case -- evidence that points to criminal behavior."

Prosecutors say Halderman acted in part of out jealousy, after learning one of the woman Letterman had had sex with was Halderman's former live-in girlfriend.

And, papers filed by the prosecution say Halderman had another motive: His ex-wife had just moved with their son to California, and the $2 million would enable him to visit the boy.