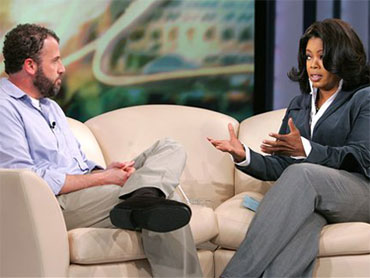 Some representative books of the 2000s show that readers may have been looking for an escape from reality and authors were willing to give it to them.

Some of the decade's top-sellers are about fear of the real world and dreams about other worlds, whether the historical past, the unreachable future or a supernatural present. They include:

• The "Harry Potter" series, J.K. Rowling. The record-setting fantasy series defied and defined the times. It stunned cynics by unearthing millions of young readers who needed only the right book to get them started. It scorned the digital market by remaining unavailable in electronic form. And, with millions of Potter readers 21 or older, it revealed a generation that didn't - and doesn't - want to grow up.

• The "Twilight" series, Stephenie Meyer. After Rowling rested, in 2007, the masses turned to romance and vampires. Most of the readers were girls, but by the end of the decade, women were caught up, too.

• "Founding Brothers," Joseph Ellis. Released in 2000, a lively, evenhanded history book that helped set off a long run of popular works about the American Revolution, a quest intensified by the Sept. 11, 2001, terrorist attacks. Ellis' book is about some key moments in the birth of the country, about the debate over the goals of the United States and the words used to achieve them.

• "The Audacity of Hope," Barack Obama. A lively, evenhanded memoir/policy book by a senator who had ideas about running the United States and a notion that words might help him achieve them.

• "The Da Vinci Code," Dan Brown. A novel, and a metaphor - for escape and word of mouth, for history as conspiracy and wish fulfillment, for world travel and the monster under your bed, for success as a symbol of success.

• "A Million Little Pieces," James Frey. A memoir, and a metaphor -- for real life not being strange enough; for the innocence of publishers and of Oprah Winfrey; for a need - so undying - to believe in redemption that the book kept on selling well after Frey's facade had been torn down.

• "Threatening Storm," Kenneth Pollack; "A Disorder Peculiar to the Country," Ken Kalfus. The first a policy book, the second a novel. The first is a call for war in Iraq that found it "unimaginable that the United States would have to contribute hundreds of billions of dollars." The second is a post Sept. 11, 2001, novel that imagined what would have happened if the war had turned out the way Pollack and others thought it would. The first book is unintentional tragedy, the second intentional farce.