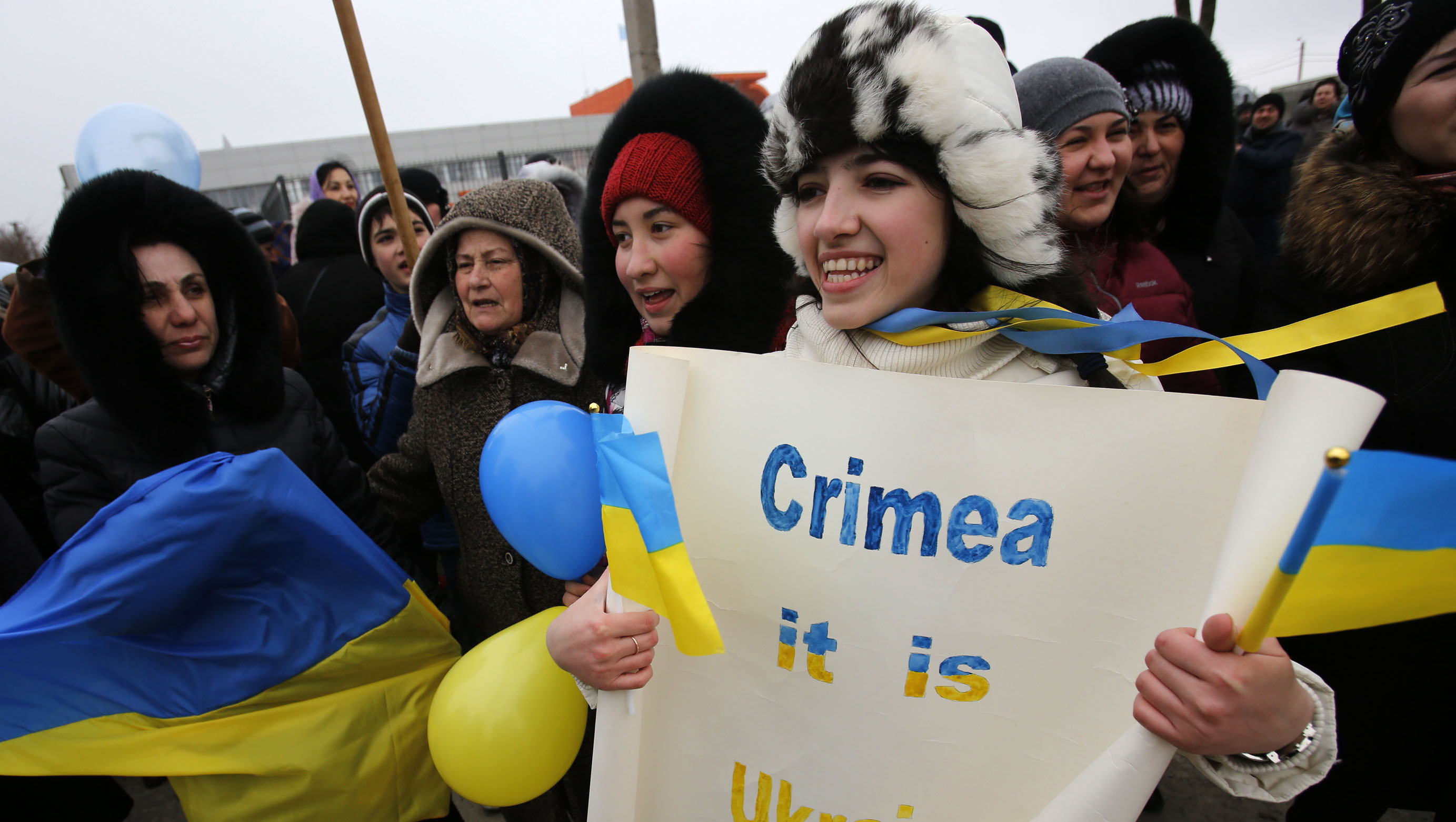 SIMFEROPOL, Ukraine - The arrival of Russian troops in Crimea has opened old wounds among the Crimean Tatars, who were deported during World War II. Fearing that once again they will be unwelcome in their homeland, some are organizing community-watch patrols to protect their families and homes in a place they strongly feel should remain part of Ukraine.

Tensions have grown with preparations to hold a referendum on Sunday on whether Crimea should stay in Ukraine or join Russia.

"It turned out that there's a sudden sense of danger," said Dilyaver Reshetov, who heads the watch group in Simferopol's Akmechet neighborhood.

While Crimea's ethnic Russian majority may be in favor of joining Russia, Muslim Tatars have rallied to support the new Ukrainian leaders in Kiev. This, they fear, will make them a target of rising Russian nationalism on the Black Sea peninsula.

Shortly after pro-Russia President Viktor Yanukovych fled Ukraine two weeks ago, about 20,000 Tatars turned out for a rally in Simferopol, the Crimean capital, in support of the new pro-Western government in Kiev. They were confronted by a smaller pro-Russia rally, and at least 20 people were injured in clashes.

"Since we have been taken over, armed men have started to turn up," Reshetov said. "For the sake of the safety of our neighborhood - because nobody is going to come to protect us - there have been initiatives to gather in order for us to ensure our own safety."

What started as just 40 volunteers has swelled to more than 200 in Akmechet, where residents have turned a mosque into a makeshift command center for organizing volunteers. The volunteers, armed with flashlights and maps, patrol the poorly lit streets and stop any suspicious vehicles trying to enter the neighborhood.

"Crimean Tatars don't sleep at night because they are on watch near their villages," said Seiran Ismagilov, 23.

The leader of the Crimean Tatar community, Refat Chubarov, said he understands why the Russians in Crimea look to Moscow, since many of their families arrived only after World War II. But the solution, he suggested, is for them to return to Russia if they are unhappy.

"We want for them to understand our love for our land and consider the fact that we do not have another homeland," Chubarov said during an interview in his office. "We don't have another choice. They do."

The Tatars, a Turkic ethnic group, now make up 12 percent of the population, but they ruled Crimea from the 15th century until the Russians conquered the peninsula in the 18th century.

In May 1944, shortly after Soviet troops drove out the Nazi German troops that had occupied Crimea for much of World War II, Soviet dictator Josef Stalin ordered the deportation of the entire population of Tatars, accusing them of having collaborated with the enemy. The Tatars, who numbered about 250,000, were shipped in freight trains to Central Asia, where more than 40 percent of them died of hunger and disease.

In the years before the 1991 collapse of the Soviet Union, Tatars began to return to Crimea, which then became part of an independent Ukraine. They have embraced their new country.

"Ukraine is moving toward Europe," said Ernst Mustafayev, a 52-year-old teacher, who had joined the protesters on the Kiev square known as Maidan. "And in a democracy, national minorities have a good life. This is why I stood on Maidan and this is why I am ready to stand up for Crimea."

Mustafayev said Ukraine has "defended the rights of my children and my people," and he has no desire to re-live the horrors Tatars suffered under Russians in the 20th century.

Chubarov, the Tatar community leader, has called for a boycott of Sunday's referendum. Holding such a vote with little preparation and troops on the streets violates the rights of all Crimean residents and will only further destabilize the situation, Chubarov said. He has urged the United Nations to send in peacekeepers.

The new prime minister of Crimea's government, who by all appearances was placed in power by Moscow, has promised that there will be no ethnic or religious discrimination in Crimea. "Everyone will have equal rights," Sergei Aksyonov said in an interview to the Russian state news agency RIA Novosti published Monday.

Urging Tatars to take part in the referendum, Aksyonov offered their representatives positions in the new regional government and promised to double the amount of money available to help those who have returned from exile.

This is unlikely to satisfy the Tatars, who resent that the Russians feel they have the right to decide Crimea's future.

"The Russians live in my homeland, in my historical homeland, and they want to decide my fate with me and instead of me," said Zair Smedlyayev, a 51-year-old father of three who returned 25 years ago from Tajikistan. "How do I feel about this? I won't allow it."

Russia's threats aren't scaring Finland away from its NATO bid
More
Thanks for reading CBS NEWS.
Create your free account or log in
for more features.
View CBS News In
CBS News App Open
Chrome Safari Continue
Be the first to know
Get browser notifications for breaking news, live events, and exclusive reporting.