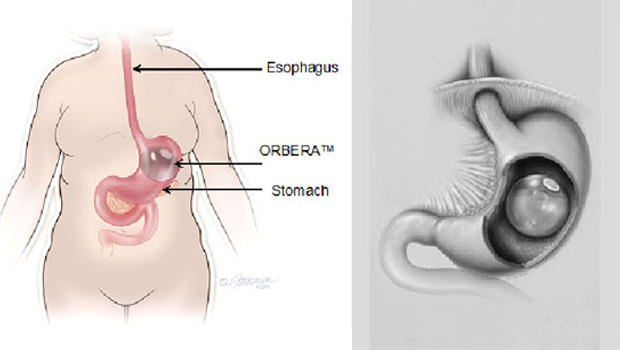 In all five cases, death occurred within a month or less of the procedure to place the balloon. In three reports, the patients died in as little as one to three days later.

"At this time, we do not know the root cause or incidence rate of patient death, nor have we been able to definitively attribute the deaths to the devices or the insertion procedures for these devices," the FDA said in a statement.

In a statement to CBS News, Apollo Endosurgery said: "While the cause of death has not been provided or determined in all cases, Apollo has not received any communication or indication from the attending physicians or hospitals that the deaths have been due to the device. ... In each of these cases, we are not aware of any evidence that suggest a device malfunction or failure."

The intragastric balloon systems work by placing one or two deflated balloons into a person's stomach by way of an endoscope that goes through the mouth. The balloons are then inflated with saline to the size of a grapefruit and are left there for six months, leaving the person with a "full" feeling.

The FDA said the deaths occurred from 2016 to the present. In February 2017, the agency sent out a letter to health care providers recommending close monitoring of patients using the balloon device to treat obesity for the potential risks of acute pancreatitis and spontaneous over-inflation.

Since then both companies have revised their labeling to address these risks.

"FDA continues to recommend that health care providers closely monitor patients treated with these devices for complications and that you report any adverse events related to intragastric balloon systems through MedWatch, the FDA Safety Information and Adverse Event Reporting Program," the agency said.