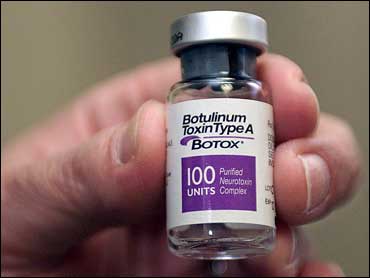 The popular anti-wrinkle drug Botox and a competitor have been linked to dangerous botulism symptoms in some users, cases so bad that a few children given the drugs for muscle spasms have died, the U.S. government warned Friday.

The Food and Drug Administration's warning includes both Botox, a wrinkle-specific version called Botox Cosmetic, and its competitor, Myobloc, drugs that all use botulinum toxin to block nerve impulses, causing them to relax.

In rare cases, the toxin can spread beyond the injection site to other parts of the body, paralyzing or weakening the muscles used for breathing and swallowing, a potentially fatal side effect, the FDA said.

Botox is best known for minimizing wrinkles by paralyzing facial muscles - but botulinum toxin also is widely used for a variety of muscle-spasm conditions, such as cervical dystonia or severe neck spasms.

The FDA said the deaths it is investigating so far all involve children, mostly cerebral palsy patients being treated for spasticity in their legs. The FDA has never formally approved that use for the drugs, but some other countries have.

However, the FDA warned that it also is probing reports of illnesses in people of all ages who used the drugs for a variety of conditions, including at least one hospitalization of a woman given Botox for forehead wrinkles.

The FDA would not say exactly how many reports it is probing.

But the agency warned that patients receiving a botulinum toxin injection for any reason - cosmetic or medical - should be told to seek immediate care if they suffer symptoms of botulism, including: difficulty swallowing or breathing, slurred speech, muscle weakness, or difficulty holding up their head.

Friday's warning came two weeks after the consumer advocacy group Public Citizen petitioned the FDA to strengthen warnings to users of Botox and Myobloc - citing 180 reports of U.S. patients suffering fluid in the lungs, difficulty swallowing or pneumonia, including 16 deaths.

Nor is it the first warning. The drugs' labels do warn about the potential for botulinum toxin to spread beyond the injection site and occasionally kill, but the warnings link that side effect to patients with certain neuromuscular diseases, such as myasthenia gravis.

That's what's different about these latest cases, said FDA's Katz: The botulism toxin seems to be harming people who don't have that particular risk factor. (Cerebral palsy involves a brain injury, not a disease.)

Still, the FDA cautioned that its investigation is in the early stages. It has asked Botox maker Allergan Inc. and Myobloc maker Solstice Neurosciences Inc. to provide additional safety records.

In a statement, Solstice said it supports FDA's probe but stressed that the agency hasn't concluded the drug poses any new risk.

While the FDA said the problems may be related to overdoses, it also has reports of side effects with a variety of doses.

Public Citizen's Dr. Sidney Wolfe criticized FDA's warning as falling short. He asked that the agency order a black-box warning, the FDA's strongest type, be put on the drugs' labels and require that every patient receive a pamphlet outlining the risk before each injection.

"Every doctor needs to notified about this, every patient needs to be notified," Wolfe said. "Children are showing the way, unfortunately some dead children."

He said drug regulators in Britain and Germany last year required that sterner warnings be sent to every doctor in those countries.

"What we're saying is, nobody should be dying of Botox, and they wouldn't be dying if the government and the companies were doing a better job warning people," Wolfe said to CBS Early Show co-anchor Maggie Rodriguez.