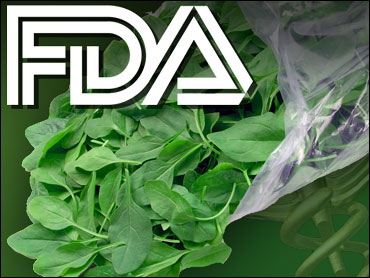 Consumers nationwide should not eat fresh bagged spinach, say health officials probing a multi-state outbreak of E. coli that killed at least one person and made dozens of others sick.

Food and Drug Administration and state officials don't know the cause of the outbreak, although raw, packaged spinach appears likely. "We're advising people not to eat it," said Dr. David Acheson of the FDA's Center for Food Safety and Applied Nutrition.

"We don't know whether we're at the early stages of it or the tail end of it. It's on-going. Currently we have eight states involved and ... who knows?" Acheson told CBS Radio News.

"Throwing out the spinach is the right thing to do," said CBS News Early Show medical correspondent Dr. Emily Senay.

The death occurred in Wisconsin, where 20 people were reported ill, 11 of them in Milwaukee. The outbreak has sickened others — eight of them seriously — in Connecticut, Idaho, Indiana, Michigan, New Mexico, Oregon and Utah. In California, state health officials said they were investigating a possible case there.

Massachusetts isn't one of the states affected, but finds shoppers are passing on spinach.

"Popeye eats it right?" laughed one man at a Boston supermarket, then turning serious. "Of course, I'd avoid it. If I thought it was going to make me sick, I wouldn't buy it."

"I'll stay away from it. I won't buy it," agreed a woman shopper. "When you hear reports like that, it frightens you with all that's going on."

The outbreak has affected a mix of ages, but most of the cases have involved women, Acheson said. Further information on the person who died wasn't available.

The Centers for Disease Control and Prevention and Wisconsin health officials alerted the FDA about the outbreak at midweek. Preliminary analysis suggested the same bug is responsible for the outbreak in all eight states.

The warning applied to consumers nationwide because of uncertainty over the origin of the tainted spinach and how widely it was distributed. Health officials did not know of any link to a specific growing region, grower, brand or supplier, Acheson said.

Amy Philpott, a spokeswoman for the United Fresh Produce Association, said that it's possible the cause of the outbreak won't be known for some time, even after its source is determined.

"If we have any indication that there's a problem, we'll pull it off the shelves, we'll get it away from our customers," said Brandon Scholz, president of the Wisconsin Grocers Association. "We're not going to take any chances."

E. coli causes diarrhea, often with bloody stools. Most healthy adults can recover completely within a week, although some people — including the very young and old — can develop a form of kidney failure that often leads to death.

"The problem with this strain, E. coli 0157, is it produces a couple of toxins that produce all the nasty symptoms," Dr. Paul Cieslak, manager of the Communicable Disease Program of Oregon State Public Health Division, told CBS Radio News.

Anyone who has gotten sick after eating raw packaged spinach should contact a doctor, officials said, but not everyone who does get sick reports it, so the outbreak may be bigger than thought.

"A lot of people can get sick and not go to the doctor and not have a culture, so usually for every case we find there are anywhere from 10 to 50 more cases who didn't get sick enough to be diagnosed," Cieslak said.

"We're telling people if they have bagged produce and they feel like it's a risk, throw it out," Michigan Department of Community Health spokesman T.J. Bucholz said. "If they feel like they have to eat it, wash it first in warm water."

E. coli lives in the intestines of cattle and other animals and typically is linked to contamination by fecal material. It causes an estimated 73,000 cases of infection, including 61 deaths, each year in the United States, according to the federal Centers for Disease Control and Prevention.

In December 2005, an E. coli outbreak sickened at least eight children in Washington state. Officials traced the outbreak to unpasteurized milk from a dairy that had been ordered to stop distributing raw milk.

Last October, the FDA warned people not to eat certain Dole prepackaged salads that were connected to an outbreak of E. coli infections in Minnesota. At least 11 people were sickened.

In 1993, a major E. coli outbreak sickened about 700 people and killed four who ate undercooked Jack in the Box hamburgers in Washington state. That outbreak led to tighter Agriculture Department safety standards for meat and poultry producers.