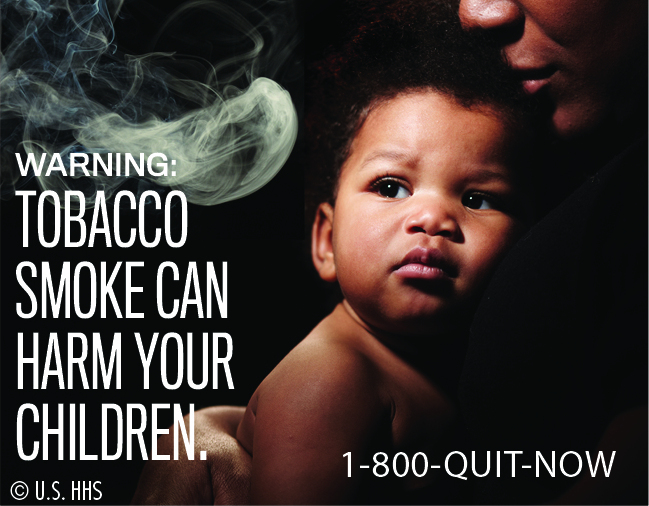 In the most significant change to U.S. cigarette packs in 25 years, the Food and Drug Administration on Tuesday released nine new warning labels that depict in graphic detail the negative health effects of tobacco use.

Among the images to appear on cigarette packs are rotting and diseased teeth and gums and a man with a tracheotomy smoking.

Also included among the labels are: the corpse of a smoker, diseased lungs, a mother holding her baby with smoke swirling around them. They include phrases like "Smoking can kill you" and "Cigarettes cause cancer" and feature graphic images to convey the dangers of tobacco, which is responsible for about 443,000 deaths in the U.S. a year.

She said, "(The labels are) really to make sure that America's young people don't start smoking. We have about 4,000 people under 18 every day who try their first cigarette, and about 1,000 of them become permanent smokers. And that's just not good for our country."

The labels will take up the top half of a pack of cigarette packs. Warning labels also must appear in advertisements and constitute 20 percent of an ad. Cigarette makers have until the fall of 2012 to comply. Sebelius said the reason for the delay until 2012 is to give manufacturers time to change the labels on their products.

Mandates to introduce new graphic warning labels were part of a law passed in 2009 that, for the first time, gave the federal government authority to regulate tobacco, including setting guidelines for marketing and labeling, banning certain products and limiting nicotine.

Photos: Gruesome cigarette labels from around the world

The announcement follows reviews of scientific literature, public comments and results from an FDA-contracted study of 36 labels proposed last November.

In recent years, more than 30 countries or jurisdictions have introduced labels similar to those being introduced by the FDA. The U.S. first mandated the use of warning labels stating "Cigarettes may be hazardous to your health" in 1965. Current warning labels -- a small box with black and white text -- were put on cigarette packs in the mid-1980s.

The new labels come as the share of Americans who smoke has fallen dramatically since 1970, from nearly 40 percent to about 20 percent. The rate has stalled since about 2004. About 46 million adults in the U.S. smoke cigarettes.

It's unclear why declines in smoking have stalled. Some experts have cited tobacco company discount coupons on cigarettes or lack of funding for programs to discourage smoking or to help smokers quit.

While it is impossible to say how many people quit because of the labels, various studies suggest the labels do spur people to quit. The new labels offer the opportunity for a pack-a-day smoker to see graphic warnings on the dangers of cigarettes more than 7,000 times per year.

Matthew Myers, president of the Campaign for Tobacco-Free Kids, told CBS News, "Tobacco use remains the number one preventable cause of premature death and disease in the United States, killing over 440,000 Americans every year. These warning labels are one of the most cost-effective ways both to reach kids who are thinking about smoking and adults who are thinking about quitting."

The World Health Organization said in a survey done in countries with graphic warning labels that a majority of smokers noticed the warnings and more than 25 percent said the warnings led them to consider quitting.

Tobacco makers in the lawsuit have argued the warnings would relegate the companies' brands to the bottom half of the cigarette packaging, making them "difficult, if not impossible, to see."

But Sebelius said on "The Early Show" that litigation has been a part of the label process "every step along the way."

She said, "We anticipate that they will continue to litigate this new effort to improve our nation's health continues. But, this follows the law. We are confident that we are well within the boundaries of what was allowed by the law, and it is, as I say, is long overdue. We spend about $200 billion a year on health-related costs, and loss of productivity due to smoking. And we're killing way too many young Americans and adult Americans."

"This is a real health crisis, Sebelius said. "And something that we can do something about. We know the research shows that these graphic warning labels are effective, and it's time for America to join the rest of the world and crack down on smoking."