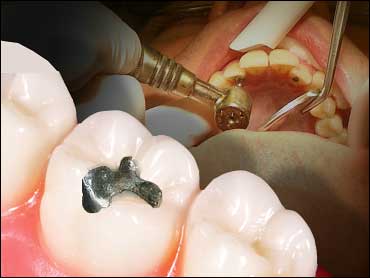 A joint panel of Food and Drug Administration advisers did not declare the so-called "silver fillings" unsafe. But in a 13-7 vote Thursday, the advisers said the federal report didn't objectively and clearly present the current state of knowledge about the fillings.

In a second 13-7 vote, the panelists said the report's conclusions about safety weren't reasonable, given the quantity and quality of information currently available.

The FDA had asked the panel of outside advisers to weigh the report, a review of 34 recent research studies.

The report had found "no significant new information" that would change the FDA's earlier determination that mercury-based fillings don't harm patients, except in rare cases where they have allergic reactions.

But panelists said remaining uncertainties about the risk of so-called silver fillings demanded further study. In particular, research is needed on the effect of mercury-laden fillings on children and the fetuses of pregnant women with fillings.

"There are too many things we don't know, too many things that were excluded," said Michael Aschner, a professor of pediatrics and pharmacology at Vanderbilt University and a panel consultant. He cast two "no" votes.

Panelists also said more study was needed on whether mercury fillings give off more vapors when they're being placed or removed.

Dr. Ralph Sacco, of Columbia University, said consumers shouldn't panic and that there was no need to have their amalgam fillings removed.

The votes were a "start" to sparking greater dialogue and awareness of the issue, said consumer activist Sara Moore-Hines, 57.

She and other activists had pressed the panel to recommend the FDA ban mercury fillings.

"Do the right, decent, honorable and God-loving thing: There needs to be an immediate embargo on mercury fillings for everyone, or at least pregnant women and children, because they are our future," said Michael Burke, who blamed mercury fillings for the early onset Alzheimer's disease diagnosed in his wife, Phyllis, in 2004.

Dr. Michael Fleming, a Durham, N.C., dentist and the consumer representative on the panel, asked the FDA to consider restricting the use of amalgam in children younger than 6 and in pregnant women. The activists — dozens attended the two-day meeting — met his proposal with applause.

"We are going to take the recommendations, your comments, and we will start evaluating the next steps, with the white paper and this whole issue of dental amalgam," Dr. Norris Alderson, the FDA's associate commissioner for science, told the panel.

Amalgam fillings by weight are about 50 percent mercury, joined with silver, copper and tin. Dentists have used amalgam to fill cavities — and have argued about their safety — since the 1800s. Today, tens of millions of Americans receive mercury fillings each year. Amalgam use has begun to taper off, though, with many doctors switching to resin composite fillings that blend better with the natural coloring of teeth.

With amalgam fillings, mercury vapor is released when patients chew and when they brush their teeth. Significant levels of mercury exposure can cause permanent damage to the brain and kidneys. Fetuses and children are especially sensitive.

Scientists have found that mercury levels in the blood, urine and body tissues rise in conjunction with mercury fillings. However, even among people with numerous fillings, exposure levels are well below those known to be harmful, the FDA report said.