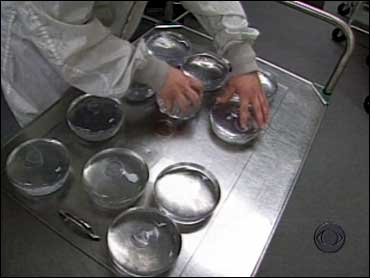 The government ended a 14-year virtual ban on silicone-gel breast implants Friday despite lingering safety questions, making the devices available to tens of thousands of women who have clamored for them.

The Food and Drug Administration approved the implants for women 22 and older, or those undergoing breast reconstruction surgery, but warned that patients probably would need at least one additional operation because the implants don't last a lifetime.

"There is reasonable assurance that Allergan and Mentor silicone-gel breast implants are safe and effective, and there is adequate information to enable women to make informed decisions," said Dr. Daniel Schultz, FDA's medical device chief.

Are silicone implants different now than they were in the early '90s? CBS News medical correspondent Dr. Jon LaPook reports that the manufacturing process is thought to be improved. But due to possible unnoticeable leakage, doctors are recommending periodic MRIs for patients.

However, Dr. Sidney Wolfe, a longtime opponent, called the implants "the most defective medical device FDA has ever approved."

The twin approvals came with conditions, including a requirement that the companies complete 10-year studies on women who have already received the implants to study leaks, as well as begin new decade-long studies of the safety of the devices in 40,000 women.

Shultz called the implants "one of the most extensively studied medical devices. We now have a good understanding of what complications can occur and at what rates."

The FDA warned that the implants are not without risk and that women may not immediately know if their implants break and silicone begins oozing into their breasts. That means women will need regular MRI exams for the rest of their lives to catch those so-called "silent ruptures."

Patients will have to be given special brochures that explain these risks.

The FDA decision opens the implants to much wider use by women seeking to reconstruct or augment their breasts. Since 1992, the silicone implants had been available only as part of research studies.

Silicone-gel breast implants first went on the market in 1962, before the FDA required proof that all medical devices be safe and effective. Thirty years later, they were banned amid concerns about their safety.

At the time, there were worries about a possible connection to a variety of diseases, including cancer and lupus. Alarming cases of ruptures added to the concern.

Since then, most studies have failed to find a link between silicone breast implants and disease.

The rupture issue persists: The implants do not last a lifetime, and eventually they must be removed or replaced, according to the FDA. A 2000 Institute of Medicine report found rupture rates as high as 77 percent.

Women whose silicone implants ruptured have reported years of pain, swelling, numbness and other symptoms that they blame on the devices. Leaked silicone gel can migrate throughout the body, forming lumps. Implants also can cause infection and form hard, painful scar tissue that can distort the shape of a breast.

Some researchers also worry that the platinum used to manufacture the implants can seep into the body and cause harm. The FDA says there is no evidence of that.

Proponents say silicone-gel implants look and feel more natural than do those filled with saline, or salt water. Those implants are sold without restrictions.

"It's a hugely positive piece of news for plastic surgeons and for patients and for the company — all three — because it really allows us to turn a page and to work with what we have believed for a long time is a better technology and better device," said Dr. Scott Spear, head of plastic surgery at Georgetown University Hospital and an Allergan consultant.

Last year, the FDA told both companies their implants could be approved once they met additional, undisclosed conditions. Federal advisers had narrowly recommended that Inamed's implants not receive FDA approval, citing concerns about the long-term durability. The same advisers endorsed Mentor's implants.

In October 2003, FDA advisers had recommended allowing the implants to be sold again. The agency overruled that recommendation.

Breast implants have grown in popularity for augmentation, despite a history of lawsuits. Last year, 291,000 women had their breasts surgically enlarged in the United States, a 37 percent increase since 2000, according to the American Society of Plastic Surgeons.

The popularity of implants for reconstructive surgery shrank over the same five-year period by 29 percent, to 58,000 procedures, according to Society statistics. Last year, 39,000 women had their implants removed.

Overall, the use of breast implants has grown since 1992 despite the FDA's de facto ban on silicone-gel implants.

Just three years later, Dow Corning Corp., once the major manufacturer of silicone breast and other implants, faced 19,000 lawsuits, pushing it into Chapter 11 in 1995. The company emerged from Chapter 11 in 2004, after setting aside $2.35 billion to settle claims.