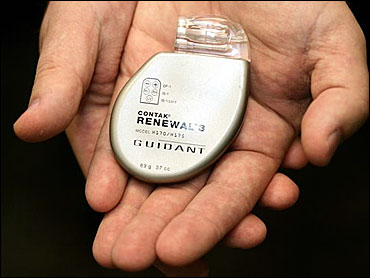 Guidant Corp. said Tuesday the U.S. Food and Drug Administration sent the company a warning letter about unresolved problems it found during an inspection earlier this year at the medical device maker's St. Paul, Minnesota, facility.

When such deficiencies are identified, the FDA issues a Form 483 to a company. If the issues are not resolved, the company may receive an FDA warning letter or regulatory action.

Guidant said in a statement it will respond promptly to the FDA warning letter, and "believes that it can fully address the concerns of the FDA without a material impact to its business."

Since June, Guidant has recalled or issued warnings about 88,000 heart defibrillators and almost 200,000 pacemakers because of reported malfunctions. The company is under investigation by federal and state officials and faces dozens of lawsuits over its recalls.

Guidant said it has completed 90 percent of the commitments it made to the FDA in its initial response to the agency's concerns. The company also said it was on schedule to complete its remaining commitments and is giving the FDA monthly progress updates.

"Guidant has taken a broad, thorough and systemic review of its quality system and has made substantial steps toward addressing all of the 483 observations," the company said.

Boston Scientific Corp. offered $25 billion, or about $72 per share, for Guidant this month after Johnson & Johnson lowered its bid to $21.5 billion in the wake of the recalls, which began after a December 2004 takeover deal was announced.

"We continue to move forward on our due diligence with the goal of reaching a definitive agreement with Guidant," Boston Scientific spokesman Paul Donovan said. He declined to comment further.

The FDA's letter, received Dec. 23, informed Guidant that it will receive further communications from the agency regarding observations that will require additional action. The agency also indicated that it would not grant requests for exportation certificates to foreign governments until those actions have been completed.