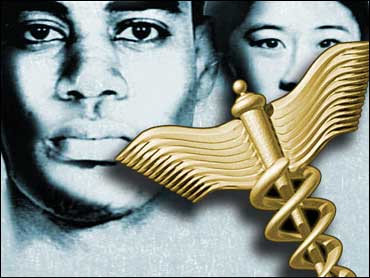 A two-drug combination pill dramatically reduced deaths among blacks with heart failure, a landmark finding that is expected to lead to government approval of the first medication marketed for a specific race.

Black cardiologists hailed this form of racial profiling after years in which minorities got short shrift in medical studies. Others complained that the drug also might help whites and should have been tested in them, but wasn't for business reasons.

"At times you can't win," said Dr. Augustus Grant, past president of the Association of Black Cardiologists, which supported the study. "Here we have a wonderful trial that shows a clear result and the issue is raised, `Why was this trial only done in African Americans?"'

The nationwide study is the largest ever done solely on blacks with heart failure. The findings were reported Monday at an American Heart Association meeting in New Orleans and will be published Thursday in the New England Journal of Medicine. The drug's maker plans to seek Food and Drug Administration approval by the end of the year.

But could this launch an era of medicine in black and white? Critics warn that race-only drugs, which may be good medicine, could also feed the disease of racism, reports CBS News Correspondent Wyatt Andrews.

"It's a message that translates into saying there's a biological basis for race, African Americans are inferior to other groups, ethnic and racial groups," argues Patricia King, a law professor at Georgetown University.

Heart failure affects five million Americans, but blacks are two and a half times more likely to develop it. It happens when the heart is too weak to pump effectively, causing fluid to back up in the lungs and leaving people weak and short of breath. Half die within five years of diagnosis.

Earlier research suggested that standard heart failure drugs called ACE inhibitors do not work as well in blacks, and that blacks may have lower amounts of nitric oxide, which plays many roles in heart health, in their blood.

Two chemicals - isosorbide dinitrate and hydralazine - boost this substance, but administering the right dose is complicated when they are prescribed separately. A Massachusetts biotechnology company, NitroMed, developed a combination pill, BiDil, that gets around this problem, but the FDA refused to license it as a new drug because earlier studies involving mostly white patients who got the chemicals separately showed no benefit.

But there were tantalizing signs that BiDil helped the few blacks in the studies, and NitroMed won a patent to use it just in that minority group.

The company then launched a study of 1,050 blacks. Half of them got standard heart failure drugs and a placebo; the other half got standard drugs plus BiDil. The study was stopped ahead of schedule last year when doctors saw BiDil clearly was better.

After roughly two years' use, only 6.2 percent of the patients who took BiDil had died versus 10.2 percent who got only standard heart failure drugs. That translates to a 43 percent reduction in deaths, said Dr. Anne Taylor of the University of Minnesota, one of the study's leaders.

Only 16.4 percent on BiDil required hospitalization for heart failure, versus 24.4 percent of the rest.

BiDil had substantial side effects - 47.5 percent on it had headaches, compared with 19.2 of the others. Dizziness occurred in 29.3 percent on the drug and 12.3 percent on fake pills.

But the favorable overall result "virtually ensures FDA approval," because the agency previously told the company that a successful study in blacks would merit it, Dr. M. Gregg Bloche, a Georgetown University lawyer and Johns Hopkins University physician, said in a commentary in the medical journal.

That is "cause for celebration" for blacks, but the company now will have no financial incentive to do a larger trial in whites because its "black-only" patent allows it to sell it that way and keep generic versions from coming the market until 2020, he said.

Others worried that the drug might not be the best choice for every black but that they will automatically be prescribed "the black pill" solely on the basis of skin color.

Being black is not a black-and-white distinction, said Dr. Timothy Gardner of the University of Pennsylvania in Philadelphia, who had no role in the study. "Physiologically, it's a sort of continuous variable," including people of mixed races, he said.

Dr. Shamir Mehta, a heart expert from McMaster University in Ontario who has done much research on ethnic differences, said the genetic differences among ethnic groups are so small that the drug should probably help whites, too.

The early studies in the 1980s that found no benefit from the two chemicals in whites were done before modern heart failure drugs were available, and that could warrant a new study involving all races, experts noted.

"We don't know how the broad population treated with appropriate background therapy would respond to this compound," said Dr. Clyde W. Yancy, a heart specialist at UT Southwestern Medical Center in Dallas who participated in the study.

The FDA could choose to approve the drug generally for heart failure with a statement saying it had been tested only on blacks, he said.

NitroMed's vice president for marketing, B.J. Jones, said the company would submit all results to the FDA and let the agency decide.

Meanwhile, experts say it is a watershed event in efforts to develop race-based medicine.

"In 2001 it was almost a fringe concept" that was highly controversial, Yancy said. "The idea was that all this would do would be further polarize medicine and have practitioners make decisions based on race: What does this person look like? There has been a relaxing of the animosity about doing this kind of study."

Dr. Raymond Gibbons, a Mayo Clinic cardiologist who had no role in the research, said: "To these investigators' credit, they didn't give up on the idea," and pursued testing the drug for blacks. "It's an admirable attempt to focus therapy on the group they thought would most benefit."