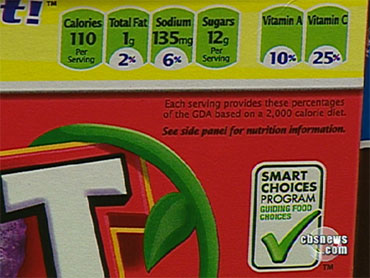 Ever wondered how that "Smart Choices" sticker wound up on the front of Froot Loops or Cocoa Puffs?

Well, federal health officials are having similar thoughts, and they're warning food manufacturers.

The Food and Drug Administration said Tuesday that nutritional logos from food manufacturers may be misleading consumers about the actual health benefits of cereal, crackers and other processed foods. The agency sent a letter to companies saying it will begin cracking down on inaccurate food labeling. The FDA did not name specific products or give a timeline for enforcement.

Smart choices is a system designed by and paid for by the nation's major food manufacturers. U.S. manufacturers, including Kellogg, Kraft Foods and General Mills, rolled out their so-called Smart Choices program last year, amid growing concern about obesity rates. The green labels appear on the front of foods that meet certain standards for calories per serving and fat content.

But consumer advocates complain about lax standards for the program, with logos appearing on everything from frozen sweets to sugary cereals. Approximately 500 products, including Fruit Loops, Kid Cuisine cheeseburgers, Teddy Grahams and Kraft Macaroni and Cheese carry the Smart Choices label.

"There are products that have gotten the Smart Choices check mark that are almost 50 percent sugar," FDA Commissioner Margaret Hamburg said during a call with reporters.

"The point of the program is to make processed foods look healthy when you really want people eating foods that have been as minimally processed as possible," Dr. Marian Nestle, a professor of nutritional studies at New York University, told CBS News correspondent Randall Pinkston last month.

Nestle was astounded by some of the products that rate the Smart Choice designation.

"This is the first product that I've seen with this logo on it," she said, holding a box of Fruit Loops cereal. "And I was kind of amazed because this is a sugary cereal."

The FDA is developing proposed nutritional standards that would have to be met before manufacturers place such claims on their packages, Hamburg said. She added that she hoped industry would cooperate with the FDA to develop standardized "labeling that all Americans can trust and use to build better diets."

"There's a growing proliferation of forms and symbols, check marks, numerical ratings, stars, heart icons and the like," said Hamburg. "There's truly a cacophony of approaches, not unlike the tower of Babel."

The FDA plans to research whether one particular approach would make it easier for consumers to select healthy foods. Hamburg pointed to the success of the U.K.'s traffic light system, which uses red, yellow and green lights to highlight nutritional quality.

The Grocery Manufacturers Association said its members will work with the FDA to provide useful nutritional information to consumers. The Washington-based group - which includes Kraft, Nestle USA and most other large food processors - said companies already have reformulated 10,000 products to make them healthier.

Such changes includes ConAgra's move to reduce sodium in its soup, hot dogs and other products by 20 percent, and General Mills adding fiber to its cereals.