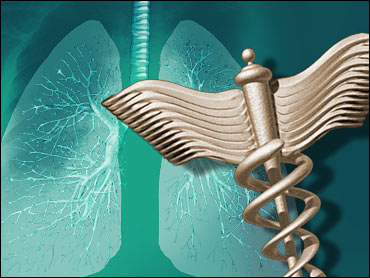 Millions of asthma sufferers in the United States are about to get a dramatically different treatment that promises to short-circuit some attacks: a drug named Xolair that won federal approval Friday.

It's only for patients with serious allergic asthma, where the breathing problems are triggered by allergies — and then only if regular asthma medicines aren't working. And it's expensive, requiring monthly shots that will cost between $5,000 and $10,000 a year, depending on the dose.

But doctors have been anxiously awaiting Xolair because it works differently than any other asthma medicine, blocking an allergic reaction well before it triggers the hallmark gasping for air.

That same reaction is behind a range of allergic ailments, from hay fever to peanut allergy, that scientists hope Xolair one day will prove key to treating, too.

"This is radically new, it's not another antihistamine or another inhaler," said Dr. Bob Lanier of the University of North Texas Health Science Center, who led research on the drug for its three developers: Genentech Inc., Tanox Inc. and Novartis Pharmaceuticals.

In one study, Xolair cut by one-third to one-half the number of asthma attacks suffered by patients whose disease isn't controlled by today's standard treatments. Many dramatically cut back or even eliminated inhaled steroids and other asthma medications.

But the Food and Drug Administration said its scrutiny of all studies of Xolair suggests it will help only about 15 percent of patients avoid an asthma attack.

A week after the first shot, "I was able to do something I'd never done in my life: Play with a dog," said Joe Wagner, 44, of Stockholm, New Jersey, a study participant. "It was like somebody turned a switch off."

The drug is generally safe, the FDA said. But three patients did suffer a life-threatening allergic reaction to the medicine itself. Also, there appeared to be a very small increase in the number of Xolair-treated patients who had various forms of cancer — half a percent compared with 0.2 percent of people given dummy injections. The FDA has asked the manufacturers to continue studying whether cancer is a real risk.

Some 17 million Americans have asthma, a chronic respiratory disease that causes recurring episodes of breathlessness, wheezing, chest tightness and coughing. Many patients require daily medication to control symptoms and prevent attacks. Every year, asthma kills 5,000 people in the United States and is responsible for nearly 2 million emergency room visits.

Allergic asthma is the most common form, affecting an estimated 7 million adults and 3 million U.S. children. Xolair is for those 12 and older with moderate to severe disease that isn't well controlled by standard therapy.

Xolair will be available by prescription in late July, according to Novartis. In studies, 60 percent of patients required one vial a month and the rest two; the dose is determined by patient size and degree of allergic reaction.

When people with allergic asthma breathe in allergens — pollen, dust, mold or animal dander — they produce large amounts of an antibody called IgE, or immunoglobulin E.

Antibodies are immune-system cells crucial to attacking disease-causing microbes. But in people with allergies, IgE is essentially an antibody gone wrong, mounting a full-scale immune attack against normal environmental substances. The IgE attaches to cells lining the respiratory tract, causing them in turn to release chemicals such as histamine and leukotrines that cause inflammation which is important if you were fighting an infection but breath-stealing when it happens in an asthma patient's airways.

Xolair is a manmade antibody that seeks out IgE in the blood and binds to it so there is less available to damage airways, interrupting the allergic reaction earlier than other asthma medicines that generally target just the inflammation steps.