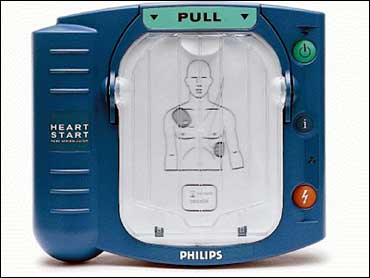 People worried about sudden cardiac arrest no longer need a doctor's prescription to buy devices that jumpstart the heart.

The Food and Drug Administration for the first time agreed Thursday to let consumers go online and purchase the $2,000 devices for home use. Some 80 percent of the instances of sudden cardiac arrest, which is best treated by a shock from a defibrillator, happen at home.

Until now, people needed a prescription if they wanted to have a HeartStart home defibrillator to use in those crucial minutes after calling 911 and before an ambulance arrived.

The FDA endorsed a July recommendation from its advisory panel to remove the prescription requirement after federal advisers were satisfied that people could use the machines safely at home.

The agency approved HeartStart for use without prescription for adults and children at least 8 years old and weighing at least 55 pounds. A device used on younger children still requires a prescription. HeartStart can only be used when the individual does not respond to shaking and is not breathing normally.

In addition, the agency will help the manufacturer, Philips Medical Systems, design a study to track the devices' use to ensure that no unexpected problems arise once the machines are more widely used.

Sudden cardiac arrest is an electrical malfunction of the heart that triggers fatally abnormal heart rhythm. Often, it is the first hint of heart disease and accounts for roughly 340,000 deaths outside of health care settings each year.

HeartStart delivers a jolt of energy equivalent to what it takes to illuminate a 150-watt light bulb for one second.

When the shock is delivered within five minutes of the sudden cardiac arrest, 50 percent of individuals survive, said Deborah DiSanzo, vice president and general manager of cardiac resuscitation at Philips Medical Systems.

Ambulances typically arrive within nine minutes of a 911 call. Once 10 minutes have elapsed since sudden cardiac arrest, the patient has a 1 percent chance of survival, DiSanzo said.

The division, part of Andover, Mass.-based Philips Electronics North America, said it has sold more than 6,000 devices from November 2002, when the FDA first approved their use, through this past Wednesday.

Waiving prescriptions could raise sales beyond 20,000 per year and perhaps cut a few hundred dollars from the $1,995 price, DiSanzo said. By Christmas, consumers should be able to purchase the devices at electronic stores and elsewhere.

"Furthermore, there is no evidence the prescription requirement increases safety," Nichol said.

Still, because of the lack of "sufficient scientific data," the organization said it could not endorse or caution against use of the devices in homes.

The FDA's mandated study may help fill that data gap.

If other people have experiences similar to Jim Baum's, the device will prove a lifesaver. Last November, Baum went into cardiac arrest shortly after he purchased defibrillators for each of his three homes. A friend used one of the devices to bring Baum back from the dead, he said.

"Without that defibrillator, I would not be here," said the 65-year-old, who lives most of the year in California.

But Dr. Arthur Kellermann, chairman of the department of emergency medicine at Emory School of Medicine in Atlanta, said he had "substantial reservations" about the FDA's actions.

"We have no scientific evidence to support the decision and I don't think that's a good way to make health policy," Kellermann said.

Kellermann said the devices were "very expensive lottery tickets" because there is "a remote possibility" a family may save a life by owning one.

Opponents argue that families could reduce survival chances by wasting precious time looking for a defibrillator rather than calling an ambulance.

Dr. Mickey S. Eisenberg, a professor of medicine at the University of Washington Medical Center, disagreed.

"I just don't buy that argument. It's the same argument as saying 'Does a smoke detector impede people from calling the fire department?"' Eisenberg said.