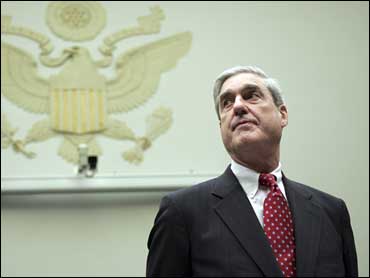 FBI Director Robert Mueller on Wednesday recalled warning the Justice Department and the Pentagon that some U.S. interrogation methods used against terrorists might be inappropriate, if not illegal.

Mueller's comments came under pointed questioning by House Democrats demanding to know if the Federal Bureau of Investigation tried to stop interrogations in 2002 that critics define as torture.

Mueller said the FBI does not use coercive techniques when questioning suspects or witnesses, and he reportedly pulled his agents out of CIA or military interrogations several years ago to protect them from legal consequences.

"Who did you inform?" Cohen asked.

Mueller said some of the FBI's concerns dated back to 2002, when top al Qaeda detainees were waterboarded by CIA interrogators. Waterboarding involves strapping a person down and pouring water over his or her cloth-covered face to create the sensation of drowning. Critics call it a form of torture.

Asked how the Justice Department and Pentagon responded to the FBI's advice, Mueller declined to discuss it publicly, citing concerns about releasing classified information. He also referred to the Justice Department's legal guidance at the time that waterboarding and other harsh interrogation methods were legal as long as they did not result in organ failure or death.

That guidance, contained in a series of memos by the department's Office of legal Counsel, since has been rescinded.

"If you could give us a response as to which agencies did not listen to you, Director, and engaged in torture, I think that would be very important for this committee to know," Cohen said. "If there's departments - of Defense and Justice, or CIA - that don't listen to the director of the FBI."

The brief exchange came during a House Judiciary Committee hearing. It highlighted Congress' interest in whether the Bush administration violated international laws against torture when allowing waterboarding against terror suspects in the years following the Sept. 11, 2001, terrorist attacks against the United States.

The Justice Department is investigating internally whether its attorneys crossed a line in authorizing the tactics. Both the CIA and the Pentagon banned personnel from using waterboarding in 2006.

Committee Chairman John Conyers, a Democrat, said he was "shocked" that the FBI's refusal to coerce suspects during interrogations was not followed by the CIA or Pentagon

"The FBI deserves credit for those standards," Conyers said, "but they should be followed by all federal government agencies, not just the FBI."