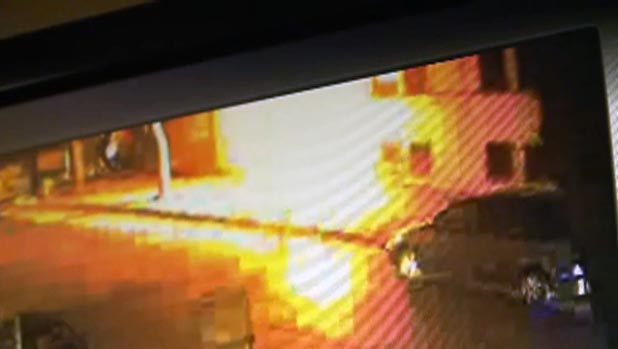 SAN FRANCISCO - After turning himself in to police, a Chinese national told federal authorities that he started a blaze at the Chinese Consulate in San Francisco because he was hearing voices.

Yan Feng, 39, of Daly City, said he unsuccessfully tried to use his passport to ignite gasoline he had poured on the consulate's door and steps on New Year's Eve, according to an FBI affidavit.

No one was injured in the fire that charred a doorway and damaged the lobby of the building.

FBI Special Agent in Charge David J. Johnson said Monday that Feng was arrested at his home Friday after he called police in Daly City, a San Francisco suburb.

The suspect, who has permanent resident status, made his first court appearance Monday on charges of causing damage to property of a foreign government and arson.

Johnson said the investigation into the motive is ongoing but the FBI believes that terrorism, politics or civil rights were not involved. "Right now, we're looking at this as purely a criminal matter," he said.

In an interview with FBI agents, Feng said he bought the gasoline at a gas station near the consulate. He said he drove to the consulate, then placed two containers filled with gasoline at the consulate's front door. When his passport failed to burn, Feng used a lighter, igniting the gas before driving away, the affidavit said.

Two days after the fire, Feng called the Daly City police dispatcher and identified himself in Chinese as the person who "made the fire" in front of the Chinese government building, according to an FBI translation of the tape.

FBI agent Michael P. Eldridge said in an affidavit that after being advised of his right to remain silent, Feng told agents "he targeted the Chinese Consulate because all the voices he had been hearing were in Chinese, and the Chinese Consulate had to have been involved." There was no further explanation in the document.

The U.S. attorney's office declined to comment on the case. Feng's attorney, public defender Steven Kalar, could not be reached.

Consulate workers said surveillance cameras showed a person exit a van with two buckets of gasoline, pour the fuel on the building and ignite the blaze. The FBI said Monday that agents recovered a minivan believed to be the one seen in the video from a residential complex across the street in the city's Western Addition area.

The FBI said no bomb-making materials were found, but they declined to discuss evidence.

Consulate spokesman Wang Chuan has condemned the attack and would not speculate on a motive.

In March 2008, a group of people poured flammable liquid on a security gate at the rear of the building and set it on fire. No injuries were reported.

That fire came on the day San Francisco supervisors heard public comment on China's human rights record months ahead of the start of the 2008 Summer Olympics in Beijing. The issue arose because of the scheduled Olympic torch run through San Francisco.

The FBI said the latest fire was not related to the 2008 blaze.