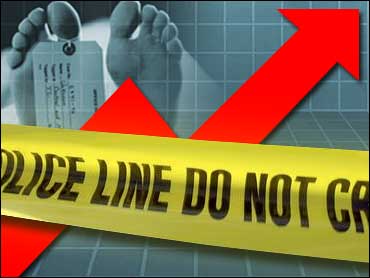 The number of big-city murders also increased, by 1.8 percent -- the same rate as homicides nationwide. Robberies and arson also rose in large population centers, but the number of rapes and car thefts dropped, FBI data show.

The new numbers confirm that crime rates continued on a two-year upward trend after a relative lull in violence between 2002 and 2004.

Justice Department spokesman Brian Roehrkasse cast the report as good news in the effort to combat gangs, guns and violence, pointing out that the rate of crimes per 100,000 people had declined to its lowest level in 30 years.

"While there's encouraging news in the latest crime rates from the FBI's Uniform Crime Reporting Program, violent crime remains a challenge for some communities," Roehrkasse said in a statement.

The Bush administration has pledged to spend $50 million this year to combat gangs and guns, and is pushing Congress for new laws to let the federal government better investigate and prosecute violent crime.

A five-year look at crime rates show that the number of murders, robberies, rapes and other violent offenses committed in 2006 is returning to the peak reached in 2002. Crime dropped dramatically after that, the FBI data show.