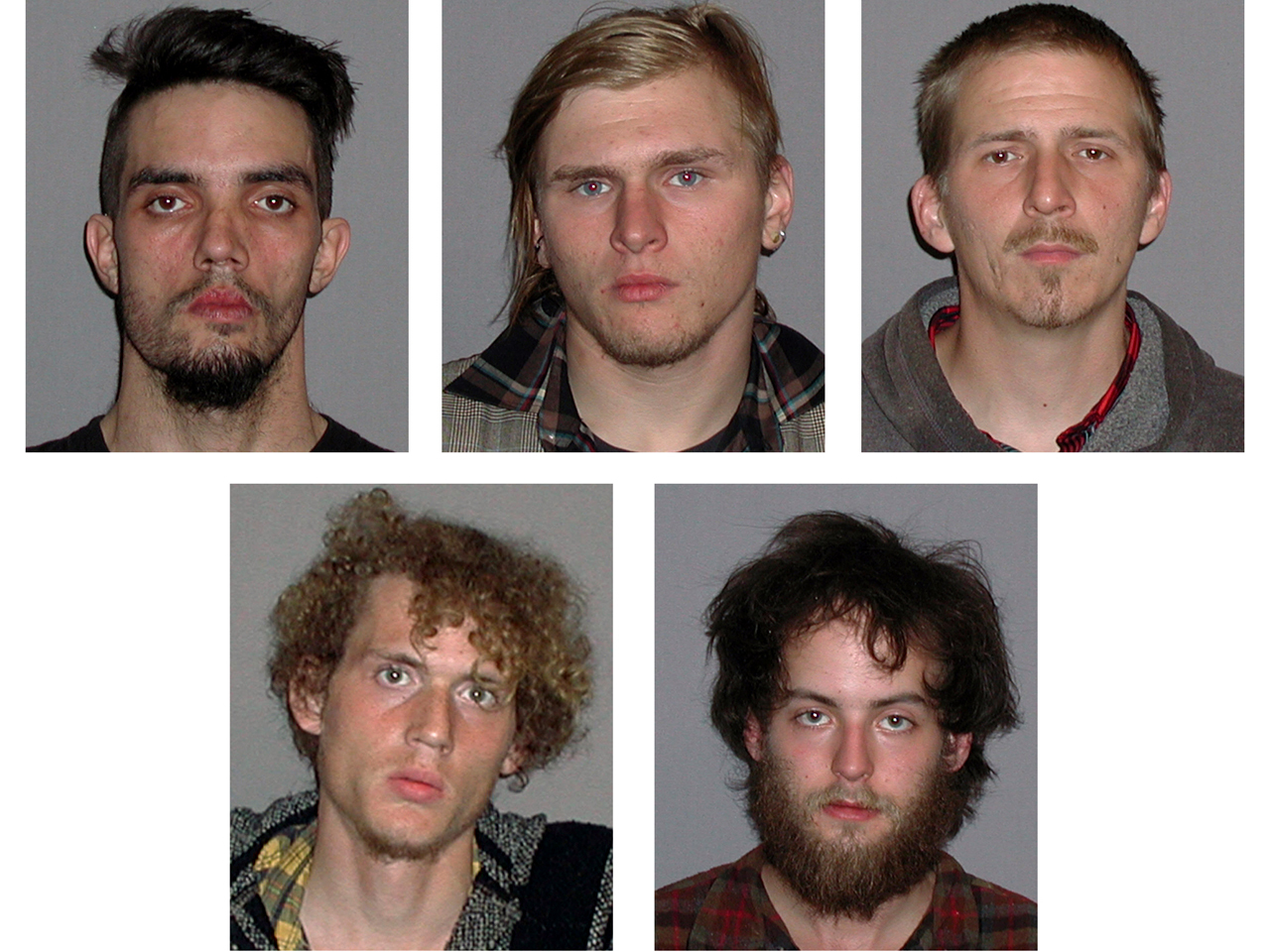 (CBS/AP) CLEVELAND - Five men charged with plotting to bomb a bridge linking two wealthy Cleveland suburbs placed what they thought were real explosives at the site and repeatedly tried to detonate them using text messages from cellphones, according to an FBI affidavit filed in court.

Federal authorities on Tuesday described the men as anarchists who are angry with corporate America and the government and unknowingly worked with an FBI informant for months as they crafted and carried out their plan.

The FBI said suspects bought fake explosives from an undercover employee and put them at the base of a highway bridge over the Cuyahoga Valley National Park, about 15 miles south of downtown Cleveland, on Monday. After leaving the park, they tried to initiate the explosives using a text-message detonation code, and they called the person who provided the bombs to check the code when it failed, according to the FBI affidavit.

Their arrests that night marked the latest case in which FBI agents planned fake terrorism plots alongside targeted suspects, an indication it continues to be a top strategy for the government in preventing terrorism.

"They talked about making a statement against corporate America and the government as some of the motivations for their actions," U.S. Attorney Steven Dettelbach said Tuesday.

Court documents detail conversations the FBI secretly recorded in which its informant discussed bomb plans with some of the suspects. In one, Brandon L. Baxter, 20, of Lakewood, allegedly said, "Taking out a bridge in the business district would cost the ... corporate big wigs a lot of money" because it would cause structural damage and prevent people from going to work.

The alleged conversations depict Douglas L. Wright, 26, of Indianapolis, as a sort of group leader who recruited others, scouted out the bridge site and participated in buying the fake explosives.

The other suspects were identified as Joshua S. Stafford, 23, and Anthony Hayne, 35, both of Cleveland, and Connor Stevens, 20, of suburban Berea.

All five are charged with conspiracy and trying to bomb property used in interstate commerce. They appeared Tuesday in U.S. District Court and were ordered jailed without bond pending a hearing Monday.

The charges carry possible penalties of more than 20 years in prison.

Meanwhile, an attorney representing Baxter is questioning the role of an undercover informant.

Cleveland defense lawyer John Pyle says his client will plead not guilty at a hearing next week.

Pyle said Wednesday the case will be put under the microscope and there are indicators the informant was playing an active role in the plot.

Wright's attorney says his client also will plead not guilty.

Similar arrests in the last few years -- including in Massachusetts, Oregon, New York and Texas -- offer a glimpse into sting operations by undercover FBI agents trying to catch possible terrorists in the act.

Defense attorneys in those cases have accused federal authorities of conducting overblown operations that entrapped their clients. Authorities have defended the practice, saying it's prevented countless terrorist attacks.

Christopher Banks, an associate professor at Kent State University who has written on terrorism, defended the tactic as one of many the federal government uses in fighting terrorism. He said each case involving a possible terrorist threat is different, but after 9/11, caution weighs more on the side of government than the individual citizen.

"In this age that we live in, and with the heightened sense that the government should be doing something to prevent these kinds of acts, in that sense it can only protect public safety," he said. "So it's a fine line."

The suspects had been associated with the anti-corporate Occupy Cleveland movement but don't share its non-violent views and don't represent Occupy Cleveland, organizer Debbie Kline said.

The alleged plotters were frustrated that other anti-corporate protesters opposed violence, Dettelbach said.

Federal authorities said their investigation was aided by a convicted criminal who worked as a paid confidential source, made contact with the some of the suspects in October and recorded conversations with them over the past three months.

The men had considered different plots, including trying to bring down financial institution signs in downtown Cleveland or attacking other targets, including a law enforcement center, oil wells, a cargo ship or the opening of a new downtown casino, according to the affidavit. The document also alleges that one suspect talked about being part of group planning to cause trouble during an upcoming NATO summit in Chicago.