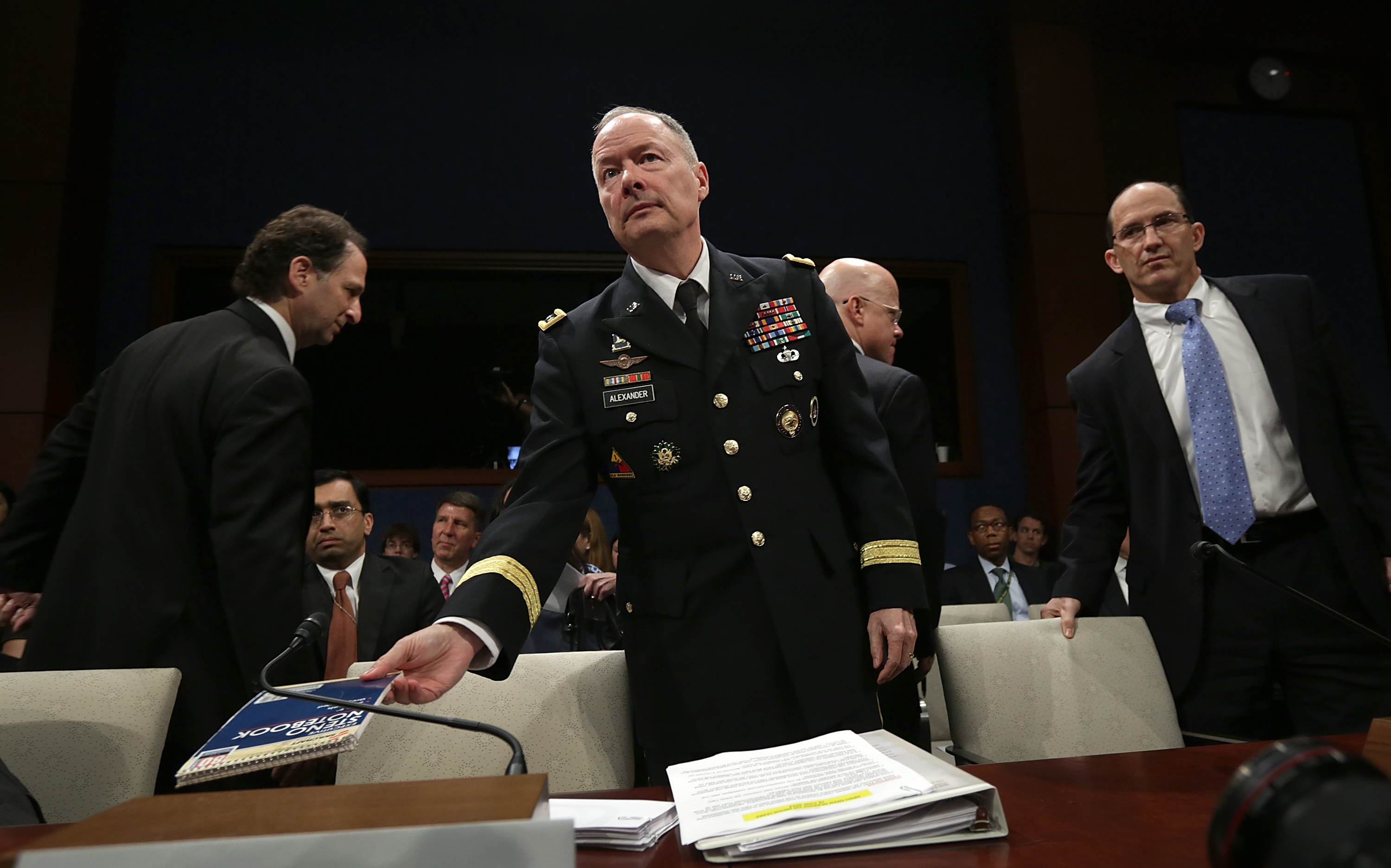 The FBI on Tuesday unveiled four terrorist plots it says were prevented in large part due to information collected by the National Security Agency's controversial, top-secret data gathering programs, including planned bombings of both the New York City subway system and the New York Stock Exchange.

According to Sean Joyce, the Deputy Director of the FBI, and General Keith Alexander, Director of the National Security Agency, more than 50 attack plots were discovered and derailed thanks to the NSA data. Alexander said information surrounding those plots would be laid out to Congress on Wednesday in a classified setting, but Joyce was able to discuss four in public.

According to Joyce, the FBI was able to stop "the first core al Qaeda plot since 9/11, directed from Pakistan," thanks to information collected through these controversial programs, which is authorized under section 702 of the Foreign Intelligence Surveillance Act.

"In the fall of 2009, the NSA, using 702 authority, intercepted an email from a terrorist located in Pakistan. That individual was talking with a individual located inside the United States, talking about perfecting a recipe for explosives," said Joyce. "Through legal process, that individual was identified as Najibullah Zazi. He was located in Denver, Colorado. The FBI followed him to New York City. Later, we executed search warrants with the New York Joint Terrorism Task Force and NYPD and found bomb-making components in backpacks."

"Zazi later confessed to a plot to bomb the New York subway system with backpacks," according to Joyce.

Another example, according to Joyce, involved a "known extremist in Yemen" that the United States was monitoring.

"This individual was in contact with an individual in the United States named Khalid Ouazzani. Ouazzani and other individuals that we identified through a FISA that the FBI applied for through the [Foreign Intelligence Surveillance Court (FISC)] were able to detect a nascent plotting to bomb the New York Stock Exchange," Joyce said. "Ouazzani had been providing information and support to this plot. The FBI disrupted and arrested these individuals."

The FBI was also able to prevent a U.S. citizen living in Chicago to bomb a Danish newspaper office that had published a controversial cartoon about the Prophet Mohammed, as well as to reopen an investigation that had been shuttered shortly after 9/11, and subsequently disrupt ongoing "terrorist activity," according to Joyce.

In light of recent leaks about the NSA surveillance programs by 29-year-old Edward Snowden, a former defense contractor, the Obama administration has been struggling to both explain and justify those programs to the American people. Tuesday's hearing was described as an effort to shed some light on how these programs work and what purpose they serve, though some of the information discussed, including the New York Stock Exchange and subway plots, had already been reported over the weekend.

On Tuesday, Alexander decried the recent leaks about the programs, and described Snowden's information as "incomplete and inaccurate." He defended the two programs as vital to the nation's national security interests, and insisted they are governed by rigorous oversight mechanisms. He also argued the leaks about those programs to the world had caused "irreversible and significant damage" to U.S. national security interests, and would ultimately benefit America's enemies.

Still, he said, "I would much rather be here today debating this point than trying to explain how we failed to prevent another 9/11." He echoed the comments of FBI Director Robert Mueller, who argued last week that the surveillance programs currently in place could have prevented 9/11.

In a recent interview with Charlie Rose, President Obama argued that Americans who are outraged by the surveillance programs are "not getting the complete story," and that the intelligence community is working on explaining its system to the American people.

"What I've asked the intelligence community to do is see how much of this we can declassify without further compromising the program," he said, in an interview with PBS that aired Monday. "And they are in that process of doing so now so that everything that I'm describing to you today - people, the public, newspapers, etc., can look at. Because frankly, if people are making judgments just based on these slides that have been leaked, they're not getting the complete story."

The president also said he wanted to clarify once and for all that "if you're a U.S. person, then NSA is not listening to your phone calls, and it's not targeting your emails, unless it's getting an individualized court order." Though he suggested the FISC hasn't turned down any requests by the FBI to wiretap a suspect, he assured it's because "folks don't go with a query unless they've got a pretty good suspicion."

Regardless, there is tension between Snowden's argument and those of various government officials: Snowden said in a chat with the Guardian -- the publication to which he has been providing information -- that the programs in question were not actually responsible for discovering information about the plots cited. Meanwhile, a number of lawmakers have argued that Snowden has been exaggerating the level of access he had to information collected by the government.