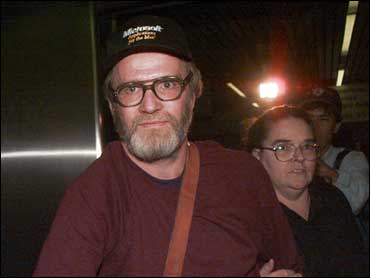 Federal agents on Wednesday searched the home of a man linked to the fatal 1982 Tylenol poisonings in Illinois and the FBI in Chicago said authorities are reviewing evidence in the deaths, which caused a nationwide scare and led to dramatic changes in the way food and medical products are packaged.

No one was ever charged with the deaths of seven people who took the cyanide-laced drugs. The FBI would not immediately confirm the search at the apartment of James W. Lewis was related to the Tylenol case, only that it was part of an ongoing investigation.

Lewis served more than 12 years in prison for sending an extortion note to Johnson & Johnson demanding $1 million to "stop the killing."

The FBI's Chicago office cited "advances in forensic technology" in a statement announcing that it, along with Illinois State Police and local departments, was reviewing all evidence in the case.

The review began in part because of publicity and tips that arrived after 25th anniversary of the deaths in 2007, according to the FBI. It has not resulted in any criminal charges.

"All of these tips have been or will be thoroughly investigated in an effort to solve this crime and bring some measure of closure to the families of the victims," the statement said.

Lewis, an out-of-work accountant, was arrested in December 1982 at a New York City library after a nationwide manhunt. At the time, he gave investigators a detailed account of how the killer might have operated and described how someone could buy medicine, use a special method to add cyanide to the capsules and return them to store shelves.

Lewis later admitted sending the letter and demanding the money, but said he never intended to collect it. He said he wanted to embarrass his wife's former employer by having the money sent to the employer's bank account.

In a 1992 interview with The Associated Press, Lewis explained that the account he gave authorities was simply his way of explaining the killer's actions.

"I was doing like I would have done for a corporate client, making a list of possible scenarios," said Lewis, who maintained his innocence.

He called the killer "a heinous, cold-blooded killer, a cruel monster."

He also served two years of a 10-year sentence for tax fraud. In 1978, Lewis was charged in Kansas City with the dismemberment murder of Raymond West, 72, who had hired Lewis as an accountant. The charges were dismissed because West's cause of death was not determined and some evidence had been illegally obtained.

In 2004, Lewis was charged with rape, kidnapping and other offenses for an alleged attack on a woman in Cambridge. He was jailed for three years while awaiting trial, but prosecutors dismissed the charges on the day his trial was scheduled to begin after the victim refused to testify, according to the office of Middlesex District Attorney Gerry Leone.

Lewis moved to the Boston area after getting out of prison in 1995 and is listed as a partner in a Web design and programming company called Cyberlewis. On its Web site, which lists the location searched Wednesday as the company's address, there is a tab labeled "Tylenol" with a written message and audio link in which a voice refers to himself as "Tylenol Man."

"Somehow, after a quarter of a century, I surmise only a select few with critical minds will believe anything I have to say," the message says. "Many people look for hidden agendas, for secret double entendre, and ignore the literal meanings I convey. Many enjoy twisting and contorting what I say into something ominous and dreadful which I do not intend.

"That, my friends, is the curse of being labeled the Tylenol Man. Be that as it may, I can NOT change human proclivities. I shant try. Listen as you like."

Messages left at phone numbers listed to Lewis's wife, Leanne, and the company were not immediately returned.

On Wednesday, two FBI agents sat parked across the street from the apartment building at a shopping center. At least two other vehicles with Illinois license plates were at the scene.

Around 7 p.m., FBI agents were seen bringing out a box and what appeared to be a long roll of brown paper they put into an unmarked white truck. When asked what they were doing, an FBI agent said, "carrying out boxes" and declined to say what the investigation was about.

About 45 minutes later, the agents took four more boxes and an old Macintosh computer to the truck and drove away.

Boston FBI spokeswoman Gail Marcinkiewicz said a storage facility in Cambridge also was searched Wednesday, but she would not say why. She also said there had been no arrests or criminal charges filed.

The deaths in 1982 took place over three days. Johnson & Johnson had its sales force remove 264,000 Tylenol bottles from Chicago-area stores, and consumers were urged to exchange any Tylenol they had for a safe bottle.

The poisoning led to the introduction of tamperproof packaging that is now standard. Bottles of the pain reliever were triple-sealed and warnings against taking capsules from damaged packages prominently displayed. J&J also sealed the bottle caps to the neck with a tight, plastic band and stretched a tough foil membrane over the bottle's mouth.

In 2007, 25 years after the deaths, survivors of the victims said they remained haunted by what happened and frustrated that nobody was convicted.

"I will never get past this because this guy is out there, living his life, however miserable it might be," said Michelle Rosen, who was 8 when her mother, Mary Reiner, collapsed in front of her after taking Tylenol for post-labor pains.