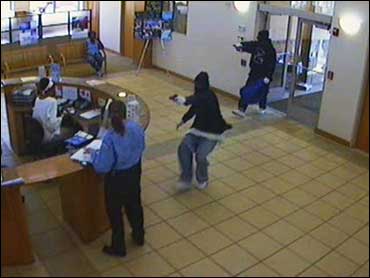 Their faces covered with what appear to be stocking caps, the men point their guns at customers and employees. In a still image, a robber stands on a counter with what looks like a bank drawer in his hand.

Authorities released the images from surveillance cameras at a Chicago bank on Wednesday, a day after the heist that killed a 23-year-old teller and wounded a guard and a customer.

In the images, the men are completely covered and seem to be dressed almost identically, with white athletic shoes, blue jeans and black long-sleeved shirts.

The thieves overpowered and disarmed a female guard at Illinois Service Federal Savings and Loan on Chicago's South Side, then leaped over an unobstructed teller's counter before escaping with a small sum of money.

Tramaine Gibson, a married father of two, was shot and killed.

Investigators later recovered a stolen car the thieves had used as a getaway vehicle, and found an empty cash box inside it.

The FBI is offering a reward of up to $50,000 for information leading to the identification and arrest of the robbers, but identification will be difficult because not even their race is clear from the images.

"Due to the violence of the bank robbery, there's a definite police force out looking for these robbers," FBI spokeswoman Cynthia Yates said Wednesday. "We're hoping that someone in the community heard something or knows something. We're following up on every and all leads."

The robbers should be considered armed and dangerous, authorities said.

"Bank robbers may have bragged about their actions to somebody who will like the idea of getting $50,000 more than they like the bank robbers," FBI special agent Tom Simon said.

CBS station WBBM correspondent Kristyn Hartman reports that the FBI says its phones have been ringing off the hooks with leads.

The wounded guard, Earl Coleman, told the Chicago Sun-Times and the Chicago Tribune that the men wore bulletproof vests and that he shot one in the back and shoulder.

Coleman, 53, was released from the hospital on Wednesday. Dorothy Sanders, a 73-year-old patron who also was shot, remained hospitalized in fair condition on Thursday.

Sanders' family said the wounded victim's now-bloodstained wallet kept the bullets from doing more damage than they could have otherwise.

Roosevelt Kindred, the victim's brother, said she'd held the wallet to her chest, and it helped deflect the bullets. "That's what saved her life," he told WBBM correspondent Dorothy Tucker.

Authorities are investigating whether the robbery is related to a heist earlier this month at a nearby Cole Taylor bank. Both cases involved three masked men wearing dark clothing.

"It's rare in Chicago to have three-person bank robbery crews taking down a bank," the FBI's Simon said.

Tuesday's bank robbery was the 94th in the city this year.