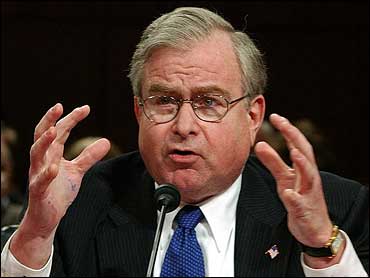 Sandy Berger, former President Clinton's national security adviser, is under criminal investigation by the Justice Department after highly classified terrorism documents disappeared while he was reviewing what should be turned over to the Sept. 11 commission.

Berger's home and office were searched earlier this year by FBI agents armed with warrants after the former Clinton adviser voluntarily returned some sensitive documents to the National Archives and admitted he also removed handwritten notes he had made while reviewing the sensitive documents.

However, some drafts of a sensitive after-action report on the Clinton administration's handling of al Qaeda terror threats during the December 1999 millennium celebration are still missing, officials and lawyers told The Associated Press.

Berger and his lawyer said Monday night he knowingly removed the handwritten notes by placing them in his jacket and pants, and also inadvertently took copies of actual classified documents in a leather portfolio.

"I deeply regret the sloppiness involved, but I had no intention of withholding documents from the commission, and to the contrary, to my knowledge, every document requested by the commission from the Clinton administration was produced," Berger said in a statement to the AP.

Lanny Breuer, one of Berger's attorneys, said his client has offered to cooperate fully with the investigation but had not yet been interviewed by the FBI or prosecutors. Berger has been told he is the subject of the criminal investigation, Breuer said.

There are laws strictly governing the handling of classified information, including prohibiting unauthorized removal or release of such information.

Government and congressional officials familiar with the investigation, who spoke only on condition of anonymity because the probe involves classified materials, said the investigation remains active and no decision has been made on whether Berger should face criminal charges.

"As a general matter we take issues of classified information very, very seriously," Comey said. "As you know we have prosecuted or sought criminal sanctions against any number of people throughout the years. It's our lifeblood, those secrets."
Berger served as Mr. Clinton's national security adviser for all of the president's second term and most recently has been informally advising Democratic presidential candidate John Kerry. Mr. Clinton asked Berger last year to review and select the administration documents that would be turned over to the commission investigating the Sept. 11, 2001, terrorist attacks.

The FBI searches of Berger's home and office occurred after National Archives employees told agents they believed they witnessed Berger place documents in his clothing while reviewing sensitive Clinton administration papers and that some documents were then noticed missing, officials said.

When asked, Berger said he returned some classified documents that he found in his office and all of the handwritten notes he had taken from the secure room, but could not locate two or three copies of the highly classified millennium terror report.

"When I was informed by the Archives that there were documents missing, I immediately returned everything I had except for a few documents that I apparently had accidentally discarded," he said.

Breuer said Berger believed he was looking at copies of the classified documents, not originals.

The officials said the missing documents were highly classified, and included critical assessments about the Clinton administration's handling of the millennium terror threats as well as identification of America's terror vulnerabilities at airports to seaports.

David Gergen, who was an adviser to Mr. Clinton and worked with Berger for a time in the White House, said Tuesday, "I think it's more innocent than it looks."

Appearing on NBC, Gergen said, "I have known Sandy Berger for a long time. He would never do anything to compromise the security of the United States."

Berger testified publicly at one of the commission's hearings about the Clinton administration's approach to fighting terrorism, while the former president met in private with the commission to answer questions.

Berger himself had ordered his anti-terror czar Richard Clarke in early 2000 to write the after-action report on the millennium threat and has publicly spoken about how the review brought to the forefront the realization that al Qaeda had reached America's shores and required more attention.

The missing documents involve two or three draft versions of the report as it was evolving and being refined by the Clinton administration, according to officials and lawyers. The Archives, which is the nation's repository for presidential papers, is believed to have copies of some of the missing documents.

Breuer said the Archives staff first raised concerns with Berger during an Oct. 2 review of documents that at least one copy of the post-millennium report he had reviewed earlier was missing. Berger was given a second copy that day, Breuer said.

Officials familiar with the investigation said Archive staff specially marked the documents and when the new copy and others disappeared, Archive officials called Clinton attorney Bruce Lindsey to raise concerns.

Berger immediately returned all the notes he had taken, and conducted a search and located two copies of the classified documents on a messy desk in his office, Breuer said. An Archives official came to Berger's home to collect those documents but Berger couldn't locate the other missing copies, the lawyer said.

Breuer said Berger was allowed to take handwritten notes but also knew that taking his own notes out of the secure reading room was a "technical violation of Archive procedures, but it is not all clear to us this represents a violation of the law."

Justice officials have informed the Sept. 11 commission of the Berger incident and the nature of the documents in case commissioners had any concerns, officials said. The commission is expected to release its final report on Thursday.

After Mr. Clinton left office, Berger founded Stonebridge International, an international business consulting firm. He is also an adviser to Lehman Brothers and his old law firm, Hogan & Hartson. Berger is married and has three children.