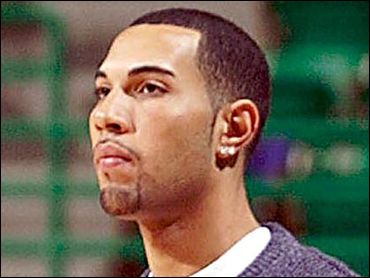 Several law enforcement agencies are helping search for a 6-foot-10, 230-pound Baylor basketball player who vanished more than two weeks ago and is feared dead.

Chief Deputy Randy Plemons of the McLennan County Sheriff's Department said Monday that his office is helping Waco police. He would not specify what deputies have done but said they "are not looking at any particular site" where the body might be.

Patrick James Dennehy, 21, hasn't been heard from since June 11. His sport utility vehicle, its license plates missing, was found abandoned in a mall parking lot in Virginia last week.

Waco police planned a Monday afternoon news conference. Officers have refused to comment since late Friday, when they said Dennehy may have been killed in the Waco area and that the list of potential suspects could include his teammates.

Rene Salinas, a spokesman in the FBI's San Antonio office, said Sunday that the FBI was helping Waco police in the investigation. He declined further comment.

John Cunningham, a speech communications professor at Baylor, said Dennehy was working on an independent study project for his class this summer.

"It's been unbelievably hard," Cunningham said Sunday. "Right now, the hardest part is not knowing. We're trying to stay positive, but it's been hard as more time passes."

Cunningham said Dennehy was a "solid B student" who dreamed of playing for the NBA and then working in public relations for his favorite team, the Sacramento Kings.

Dennehy often sat in the front row so he could concentrate and didn't talk much to his teammates, who sat in the back, Cunningham said. But the professor said he was surprised about reports that basketball players may be suspects.

"I've taught those guys, and there's no way in my mind that any of them are capable of doing anything like that," Cunningham said.

The center, a junior speech communications major from Santa Clara, Calif., transferred last fall from New Mexico to Baylor, the oldest college in Texas and the world's largest Baptist university with more than 14,000 students.

Dennehy's stepfather, Brian Brabazon, told the Waco Tribune-Herald someone had recently stolen money from his stepson and that Dennehy had told Baylor coaches he was scared.

Waco police apparently are investigating reports that Dennehy recently argued with at least two players and may have been threatened, the newspaper reported.

Coach Dave Bliss, a former University of New Mexico coach now at Baylor, had given Dennehy a second chance after he was kicked off the New Mexico basketball team. Dennehy was thrilled at the opportunity.

"It's a fresh start," he said when accepting a scholarship in May 2002. "I feel great. It's a new coach, a new team, a new set of personalities."

Over the weekend, Bliss called Dennehy "a gem" and said: "The team, the university and all the members of the Baylor family and myself are in tremendous disbelief. ... No part really seems real."

"This is a guy you practice with, lift weights with, eat meals with ... so it's got to be tough on them. That's your brother," said Henry, a former University of New Mexico player who showed him around campus during a recruiting trip when Dennehy was a high school senior.

William Richard Guinn said Sunday that his son, Baylor player R.T. Guinn, had no comment because Bliss told the team not to speak to reporters.

"It was just a typical conversation in the evening, just typical how we were doing," she told reporters. "He told me he just needed to go and call me the next day."

She said she couldn't discuss whether Dennehy had expressed concern for his safety or whether he was having problems with teammates or anyone else.

One of his former roommates and longtime friends said Dennehy has never been the type to disappear for days on end without calling someone, or the sort to put himself in danger with gambling, gangs or drugs.

"I just remember Pat as being always to himself. He wasn't like a person who would cause trouble for no reason," said Senque Carey, one of Dennehy's UNM teammates.

Dennehy had an impressive but controversial two-year stint at the University of New Mexico, where he averaged 10.6 points and 7.5 rebounds his sophomore year. He was cut from the team after losing his temper during practice, less than two weeks after he argued with a teammate during a game, kicked a chair and stormed out.

Dennehy wasn't eligible to play at Baylor last season but was expected to compete for playing time next year.

Dennehy played two seasons at the University of New Mexico, where he averaged 10.6 points and 7.5 rebounds his sophomore year and was named honorable mention All-Mountain West Conference in 2001-02.

He was cut from the team after losing his temper during practice, less than two weeks after he argued with a teammate during a game, kicked a chair and stormed out.

Team doctors said a medical condition may have contributed to
the outburst, but would not say what it was.