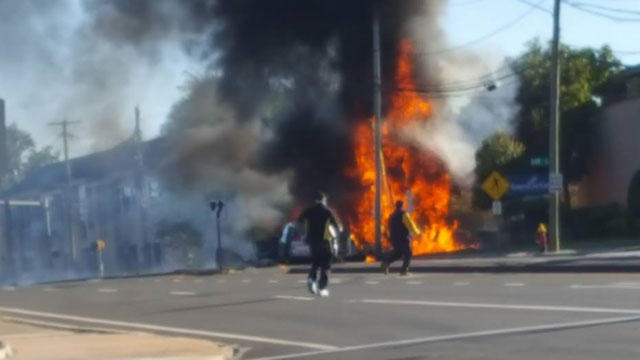 EAST HARTFORD, Connecticut - The deadly crash of a small plane that struck a utility pole near the Connecticut River in East Hartford appears to have been intentional, according to investigators and the surviving witness.

The crash appeared to have been a suicide attempt by the student, and terrorism was ruled out, the official, who wasn’t authorized to speak publicly, told The Associated Press on the condition of anonymity.

In a statement Tuesday afternoon, the National Transportation Safety Board announced it had turned over the investigation of the crash to the FBI because their probe so far “indicates the crash is the result of an intentional act.”

Gov. Dannel Malloy said on Wednesday that the situation concerned him.

“As a nation, we have had to adjust to this new reality, we recognize that people almost always wonder if someone meant to do us harm, but we must exercise caution without jumping to conclusions before discovering all the facts,” Malloy said.

Police said there were two sets of controls aboard the plane that crashed around 3:30 p.m. Tuesday and left the flight instructor with serious burns and the student on board dead. Two people in a minivan were also taken to a hospital with minor injuries.

The instructor described the student pilot as disgruntled about learning to be a pilot, the U.S. official said.

East Hartford police Lt. Joshua Litwin told reporters Wednesday that he didn’t know who was controlling the plane when it crashed on a road.

Prevalla’s social media pages indicate he’s president of the American Flight Academy and a managing member of the Hartford Jet Center, both based in Hartford. The pages say he is from Albania and lives in Hartford.

On LinkedIn, Prevalla said he received a bachelor’s degree in aviation science from Mountain State University, a now-defunct university in Beckley, West Virginia.

Freitekh lived in the Chicago suburb of Orland Hills since 2013 and received a private pilot certificate last year from the Federal Aviation Administration, public records show.

East Hartford Mayor Marcia Leclerc said Wednesday that the survivor of the crash near a military jet-engine manufacturer told authorities that it was intentional. Leclerc cautioned that the information has not been confirmed.

“It’s troubling,” Leclerc said. “But I also know that stories change and information can be skewed. We’re waiting for the facts to come out.”

“The path that the plane took could have been much worse. So we’re very fortunate in that sense,” Sansom said.

The Hartford Courant reports that the Cessna took off from Hartford’s Brainard Airport on Tuesday with a student pilot and an instructor on board. It struck a utility pole in East Hartford and crashed around 4 p.m., bursting into flames.

The Piper PA 34 twin-engine plane crashed on Main Street in East Hartford at around 3:30 p.m., according to the deputy police chief. Main Street was shut down between Brown Street and Ensign Street. Drivers were being asked to avoid the area, CBS affiliate WFSB reports.

Two people were in a nearby car when the plane crashed on Main Street, police said. Authorities said the car occupants were traumatized from the crash and were taken to the hospital. The car they were in was never hit by the plane.

Officials said the plane originated from a local flight school. The Federal Aviation Administration said the aircraft was on final approach to a runway at Brainard Airport.