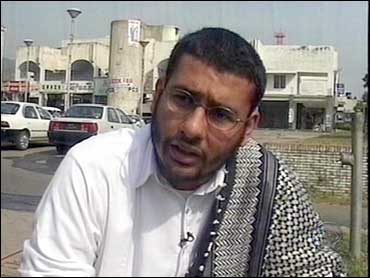 An American computer programmer who later became an FBI informant told a British court during 17 days of testimony that he ran training camps in Pakistan for Islamic militants and nurtured a generation of homegrown British terrorists.

Mohammed Junaid Babar's testimony in the yearlong trial of five men convicted Monday of a plot to bomb targets in London revealed how disaffected Britons were trained for terrorism in Pakistan, where many have family ties.

Flanked by U.S. marshals on the witness stand, Babar — who prosecutors said is the first FBI informant to testify in a British terror case — described how the plot developed in the cramped mosques of suburban England and the hills of Pakistan's tribal belt.

It was his testimony that cemented ties between the 2005 al Qaeda-linked attack on London's transit system and the five men sentenced to life in prison for plotting to detonate a bomb made of a half ton of fertilizer in the city.

A naturalized American from Pakistan, Babar was an associate of the ringleader of the deadly July 7, 2005, transit attack in London, the fertilizer bomb plotters and a group who cased Britain's luxury hotels and targets on Wall Street, law enforcement officials said.

Babar pleaded guilty in the United States in 2004 to smuggling money and military supplies to a senior al Qaeda figure and awaits sentencing.

The slightly built Yankees fan from Queens described how he mingled with radicals from the fall of 2001, when he quit a job as a computer programmer and left New York for Lahore — saying he was radicalized by the U.S.-led invasion of Afghanistan.

In 2002, Babar was involved in two plots to assassinate Pakistan's president, Gen. Pervez Musharraf, he said in testimony.

Two years later, having won the trust of senior al Qaeda leaders, he traveled to the Pakistani province of Waziristan to supply cash and night vision goggles as the terror network held a clandestine summit.

Babar's house and office in Lahore became a magnet for young militants — an outpost of Britain's al-Muhajiroun militant Islamic group that was banned by British authorities after members praised the Sept. 11 attacks.

His home was also a virtual armory: A kitchen spice rack was packed with jars of chemicals, and aluminum powder and fertilizer for making bombs were stuffed in a bedroom cupboard.

The backyard was a makeshift firing range, Babar testified. Buried close by was a cache of AK-47 rifles, grenades and ammunition.

Babar, who was given immunity from prosecution in Britain in exchange for his testimony in March and April 2006, told the court he organized a series of training camps in northern Pakistan in 2003.

Wearing a neatly trimmed beard and glasses, Babar told the court that Omar Khyam, head of the fertilizer bomb plotters, assisted in setting up camps — telling recruits al Qaeda would be there to select operatives.

Khyam claimed al Qaeda chiefs urged him to plan "multiple bombings ... either simultaneously or on the same day" in Britain, Babar told the court.

Among pupils at their camps was the ringleader of the London transit bombings, Mohammed Siddique Khan, who experimented with explosives along the frontier with Afghanistan, Babar said.

He said Khyam also tried at one point to arrange training on how to hijack airplanes from a Kashmiri terror group.

Babar told jurors that during visits to Britain in 2002, he and several others had cheered videos of the Sept. 11 attacks on the United States and heard speeches by radical British cleric Abu Hamza al-Masri, jailed in 2006 for soliciting murder.

"We were shown a couple of videos, video wills of those people who carried out 9/11," Babar said. "Everyone at the meeting agreed with it, everyone was in praise of those who carried it out."

Arrested in New York in 2004, Babar has since given evidence to prosecutors in Britain, the U.S. and Pakistan.