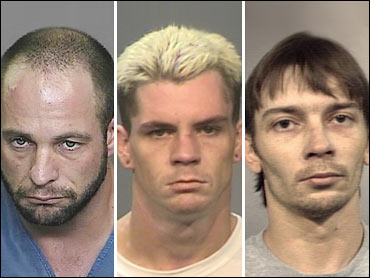 Authorities investigating a possible plot to assassinate Barack Obama at the Democratic National Convention have three men in custody - including one found with high-powered rifles, three fake IDs and two wigs in a truck - but they expressed doubts Tuesday that the suspects had posed a credible threat.

Law enforcement sources told CBS station KCNC-TV in Denver that one of the suspects "was directly asked if they had come to Denver to kill Obama. He responded in the affirmative."

One of the suspects told authorities they were "going to shoot Obama from a high vantage point using a ... rifle ... sighted at 750 yards," reported KCNC.

The men arrested Sunday face drug and gun counts but are not expected to be charged with making threatening statements, conspiracy or other national-security-related crimes, according to a federal law enforcement official in Denver who spoke on condition of anonymity because the charges have not yet been filed.

Obama will become the first black nominee for president by a major party at this week's convention. One of the men arrested, Nathan Johnson, told a Denver TV station that others involved in the case had made racist statements regarding Obama and had discussed killing him Thursday, the day of his acceptance speech at Invesco Field at Mile High.

By Tuesday, Johnson was declining media requests for interviews. He did not speak at a bond hearing where he was given $10,000 bond. The low bond amount, though, indicated authorities don't believe he was capable of assassinating Obama.

"We're absolutely confident there is no credible threat to the candidate, the Democratic National Convention, or the people of Colorado," U.S. Attorney Troy Eid said in a statement.

The assassination investigation was triggered after police in Aurora, a suburb east of Denver, stopped a truck that was swerving erratically around 1:30 a.m. Sunday. The driver, 28-year-old Tharin Gartrell, had a suspended driver's license, and the truck was rented in the name of another person, said Aurora police Detective Marcus Dudley.

Johnson, 32, and Shawn Robert Adolf, 33, were arrested in area hotel rooms after interviews with Gartrell. Adolf jumped out a sixth-story window of a hotel when police arrived Sunday. He broke his ankle in the fall but tried to run before police found him a short distance away.

Three senior FBI officials said it's unclear whether shooters could have had a clear path to hit the stage from outside the convention hall. At least two of the men may have had white supremacist ties, the officials said, adding that it was unclear whether any of them were serious about carrying out threats. The officials spoke on condition of anonymity because they were not authorized to discuss the case.

A fourth federal official familiar with the investigation said an assassination attempt was unlikely.

"The capability and their opportunity and what they had for their weaponry - I don't see that they would have been able to carry it out," the official said on condition of anonymity because the investigation is ongoing.

A news conference to discuss the charges was expected later Tuesday.

Adolf was hospitalized and was being held on $1 million bond for several outstanding warrants involving drug charges. Adolf had a handcuff key in one hand and a swastika ring on the other when he was arrested, a senior FBI official said. Adolf was listed on the "Most Wanted" list of the Weld County, Colo., sheriff's department for burglary, larceny, aggravated motor vehicle theft and other charges.

Gartrell, who has no known address, was being held at the Arapahoe County jail on $50,000 bail on drug and weapons charges. The jail said he was due in court Thursday.

A woman described by federal authorities as the girlfriend of one of the men was also arrested, though her name and charges weren't immediately clear.

Law enforcement officials were also investigating whether the men were linked to vandalism shootings that targeted at least two federal buildings in Denver over the past two weeks. Windows were shot at the U.S. Custom House and the U.S. Military Entrance Processing Station on the same street in Denver's downtown Federal District.

Additionally, a bullet was recovered from a Hertz rental car that was hit on Aug. 15, and authorities are now looking to see if it could have matched the guns seized from the men.

Lee told the AP that Gartrell was run over by a truck as a child and that "it was absolutely amazing that he wasn't hurt badly."

As a teen, Gartrell tried to enroll at a high school about 80 miles north of Las Vegas, but provided transcripts from a high school in Colorado that showed "quite a bit of disciplinary action," said Debi Smallwood, administrative aide to school Principal Steve Hansen. Gartrell was told he'd have to enroll in an alternative high school but never did, Smallwood said.