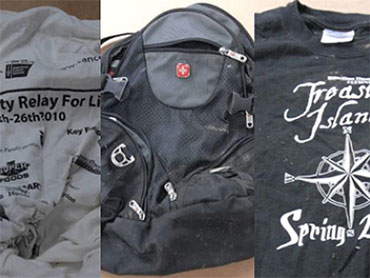 SPOKANE, Wash. -The FBI arrested a suspect after an investigation into the backpack bomb discovered along the route of a Martin Luther King, Jr., Day parade n Spokane, Washington in January.

A law enforcement source says Kevin William Harpham was arrested outside his home in rural Eastern Washington earlier today by FBI agents and put up no resistance.

Harpham was identified as the suspect through "good old fashioned" police work and some forensic evidence recovered from the bomb, reports CBS News' Bob Orr. Now the FBI is going through his computer and communications in an effort to determine if anyone else was involved in the failed attack.

This is still an active investigation and other arrests cannot be ruled out.

Also, an organization which tracks hate groups says Harpham has been affiliated with the National Alliance, a white supremacist and neo-Nazi group. It is not clear if Harpham is still a member. His service record reveals Harpham served in the US Army and then Army reserves 1996 - 2003.

Harpham is in custody and most of the evidence in his case remains under court seal. Harpham has been charged with one count of attempting to use a weapon of mass destruction and one count of knowingly possessing an improvised explosive device.

The IED was placed along the route of the Martin Luther King, Jr Day parade, and sources tell CBS News that it was positioned in such a way to potentially cause significant damage and injuries. It was spotted by passersby the morning of the parade and was rendered safe by bomb squad technicians before it could explode.

The investigation has been a top priority for the FBI.


The motive for the attempted bombing is unclear, although the timing on the civil rights leader's holiday had the FBI speculating that it may be the work of racists.

Residents of this city of 208,000 had been questioning why the investigation appeared to be moving slowly.

After an initial disclosure of many details, the FBI clammed up, leaving locals worried that the bomber was still at large and may strike again.

The FBI initially released photos of the backpack and of two T-shirts found inside. Spokane County Sheriff Ozzie Knezovich said he was told the bomb was mixed with shrapnel and also had a chemical component.

The bomb was sent to an FBI lab in Quantico, Va., and the agency offered a $20,000 reward for information from the public. The FBI has said it received plenty of photos and video from the public, but nothing that has allowed them to identify a suspect.

The two T-shirts were an intriguing detail; both were tied to Stevens County, which is just northwest of Spokane. One of the shirts was distributed last year at the "Relay for Life" race in Colville. The second shirt - which had the words "Treasure Island Spring 2009" on the front - was from a local theater production in 2009 in the town of Chewelah.

The area once served as headquarters for Richard Butler's Aryan Nations, whose members were lured by the small number of minorities.

Leaders of some local white separatist groups have denied involvement in the bombing.

"The Aryan Nations does not advocate any violence," said Jerald O'Brien, leader of the remnants of the group in nearby Coeur d'Alene, Idaho.

Shaun Winkler, of the White Knights of the KKK in northern Idaho, said his group did not plant the bomb and that its members prefer distributing propaganda to going to prison.

Potok said there was a lot of anger among U.S. residents, fueled by economic woes, divisive politics and rising numbers of immigrants. He viewed the bomb in Spokane as part of a trend of domestic terrorism.

He also noted that a week before the bomb was found in Spokane, a neo-Nazi was arrested in Arizona for possessing 12 grenade-like devices. Also that in that week before, a man was arrested in the parking lot of a Michigan mosque in a car loaded with explosives.

"That's three cases in an 11-day period," Potok said, but added that the cases appeared unrelated. "I think we are in the middle of a super-heated atmosphere."