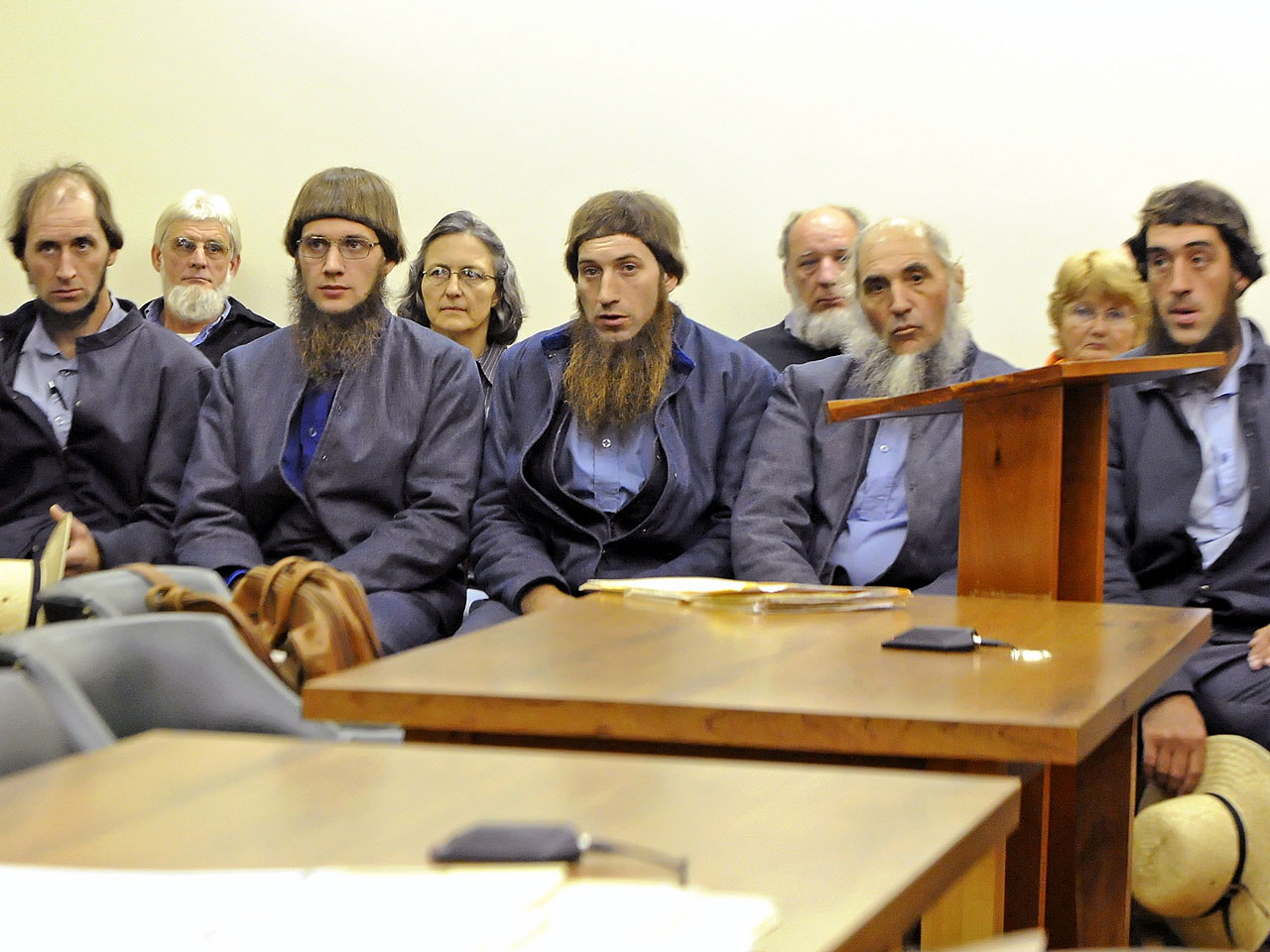 MILLERSBURG, Ohio - The leader of a breakaway Amish group allowed the beatings of those who disobeyed him, made some members sleep in a chicken coop and had sexual relations with married women to "cleanse them," federal authorities said as they charged him and six others with hate crimes in hair-cutting attacks against other Amish.

Authorities raided the group's compound in eastern Ohio on Wednesday morning and arrested seven men, including group leader Sam Mullet and three of his sons.

Several members of the group carried out the attacks in September and October by forcefully cutting the beards and hair of Amish men and women, authorities said. Cutting the hair is a highly offensive act to the Amish, who believe the Bible instructs women to let their hair grow long and men to grow beards and stop shaving once they marry.

The attacks struck at the core of the Amish identity and tested their principles. They strongly believe that they must be forgiving in order for God to forgive them, which often means handing out their own punishment and not reporting crimes to law enforcement.

"You've got Amish all over the state of Ohio and Pennsylvania and Indiana that are concerned. We've received hundreds and hundreds of calls from people living in fear," he said. "They are buying Mace, some are sitting with shotguns, getting locks on their doors because of Sam Mullet."

Mullet told The Associated Press in October that he didn't order the hair-cutting but didn't stop his sons and others from carrying it out. He said the goal was to send a message to other Amish that they should be ashamed of themselves for the way they were treating Mullet and his community.

"They changed the rulings of our church here, and they're trying to force their way down our throat, make us do like they want us to do, and we're not going to do that," Mullet said.

U.S. Attorney Steven Dettelbach said Wednesday that religious differences should be a matter of theological debate, not disputes "resolved by late night visits to people's homes with weapons and violent attacks." He said he did not know how often hate crimes involve intradenominational disputes.

The seven men were in custody and expected to be arraigned Wednesday in Youngstown. They include Mullet; his sons Johnny, Lester and Daniel; Levi Miller; Eli Miller; and Emanuel Schrock. The charges carry a penalty of up 10 years in prison.

Prosecutor Steve Knowling, who filed state charges against five of the same defendants last month, said he would dismiss those counts and let federal prosecutors take the lead in the case.

In the state case, an Amish bishop and his son said they were held down while men used scissors and a clipper to cut their beards. Similar attacks were under investigation in Amish communities in eastern and northeastern Ohio.

A defense attorney in the state case, Andy Hyde, said Sam Mullet would fight the federal charges. Hyde said he didn't know if he would represent Mullet in federal court.

The seven men were sleeping when the FBI and local police showed up at their homes before dawn Wednesday, Abdalla said. Three men initially refused to come out of their rooms, but all seven were arrested without incident, he said.

The attacks came amid long-simmering tension between Amish bishops and Mullet's group, which he established in 1995.

An FBI affidavit said Johnny, Lester and Daniel Mullet and Levi and Eli Miller all confessed in early October to taking part in at least a couple of the attacks.

Johnny Mullet told detectives that it was his idea to cut the hair and beards and that he discussed the idea with his father, who gave him the addresses of two victims, the affidavit said.

Lester Mullet told detectives that after two attacks in late September, the men went home and told Sam Mullet what happened. He said his father laughed and called them nuts, the court document said.

Abdalla, the sheriff, said he didn't know the specifics of the religious disagreements that prompted Mullet to form his own community in 1995.

One of Mullet's daughters-in-law and a former brother-in-law told investigators that Mullet controls everything that happens within the community outside Bergholz and that he allowed others to beat members of the group who disobeyed him, according to an affidavit filed in federal court Wednesday.

Mullet punished some by making them sleep in a chicken coop for days and was sexually intimate with married women in the community so that he could "cleanse them of the devil," the two said in the affidavit.

Both said they left the community because they did not want to live under Mullet's control.

Authorities said previously that some Amish refused to press charges, following their practice of avoiding involvement the courts.

Dettelbach alluded to the issue, saying: "It is not the victim's job to decide or to bring charges. I think that's a message I would like people to understand. These charges in this case are the result of our independent determination that crimes occurred."

Stephen Anthony, head of the FBI in northern Ohio, said hate crimes are a priority for the agency.

"The message we'd like to send should be clear that the FBI and all of our law enforcement partners represented here today take civil rights violations very, very seriously," he said.

Ohio has an estimated Amish population of just under 61,000 -- second only to Pennsylvania -- with most living in rural counties south and east of Cleveland.

They have a modest lifestyle and are deeply religious. Their traditions of traveling by horse and buggy and forgoing most modern conveniences distance themselves from the outside world and symbolize a yielding to a collective order.