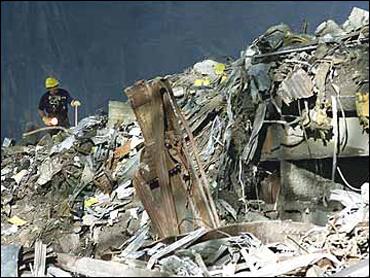 The FBI has banned its employees from taking any items from crime scenes or evidence sites after Justice Department investigators found that 13 agents took debris from the rubble of the World Trade Center.

The new policy follows a report by Glenn A. Fine, the Justice Department's inspector general, concluding that agents took a Tiffany globe paperweight, chunks of concrete, metal and bolts and a U.S. flag from the rubble collection site at the Fresh Kills landfill in Staten Island, N.Y.

Three of the agents have been referred to the FBI's Office of Professional Responsibility for further disciplinary action, officials said: one who took the dirt-encrusted globe, one who shipped 80 pounds of debris to his home office and one who may have made misleading statements to investigators.

The story was first reported by NBC.

In a statement, the FBI said that 400 agents were assigned to the Fresh Kills site and that there was no evidence that any of the 13 implicated by the inspector general took items for personal gain. A senior FBI official, speaking Thursday on condition of anonymity, said the agents apparently viewed the items as harmless mementos.

Prior to the inspector general's report, there was no written FBI ban on removal of such items. The new policy, adopted in January, prohibits all of the FBI's 28,000 employees from removing any debris or evidence from such a site, the statement said.

"While the removal of evidence or personal effects from an official site is never permissible, the FBI did not have an established policy that applied to items determined not to be evidentiary in nature, of forensics value or identified as a personal item," the FBI statement said.

The investigation began when the Tiffany globe wound up on the desk of an FBI secretary in Minneapolis, then was broadened when it became clear that more items had been taken from the Fresh Kills site.