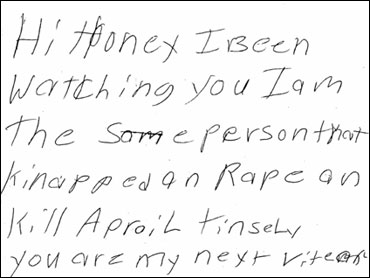 (AP Photo/Fort Wayne Indiana Police)
An FBI composite of handwritten notes left at the homes of four young girls in and around Fort Wayne, Ind. The notes take responsibility for the 1988 abduction, molestation and death of April Tinsley.

Fort Wayne, Ind. (CBS) It's a crime that has gripped the nation for decades. Eight-year-old April Tinsley was abducted in Fort Wayne, Ind., while she walked to a friend's house April 1, 1988. She was later raped and killed. 21 years later, the case is still cold.

What makes the crime particularly notable is the killer continued to torment the residents of Fort Wayne years after the crime. He surfaced several times, police say, posting notes about his involvement with the Tinsley slaying, and handing others to local children.

"Hi Honey I Been watching you," one said. "I am the same person that kidnapped an Rape an kill Aproil tinsely here is a present foR yo you are my next vitem."