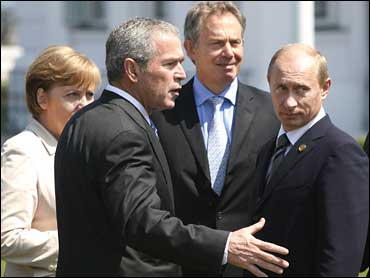 
The legacy of the Bush Administration will be measured not just by the destruction it unleashed in Iraq but by the hatred of the United States that its other policies have ignited around the world. The June G-8 meeting of industrialized nations provided a chance to undo some of this damage and reassert American internationalism. Instead, the Administration chose to pursue a phony internationalism, wrapping its contempt for the concerns of other nations in a ribbon of false global goodwill. In this guise the Administration continued its earlier attacks on international law and cooperation — from its spurning of the Kyoto Protocol to its rejection of the International Criminal Court and its withdrawal from the antiballistic missile treaty.

Similarly, Bush's call for $30 billion over the next five years to fight the global AIDS epidemic was intended to spur increased commitments from other wealthy nations. But although the United States leads the world in dollar contributions, Bush's expanded AIDS plan has all the flaws of his original one. Largely bypassing the multilateral Global Fund, Bush has created a parallel and redundant program that, against the international public health consensus, continues to insist on abstinence-only education and restrictions on needle exchange.

The Administration's approach to Iran and nuclear nonproliferation is another case in point. The White House's support for the EU-3 talks and efforts to win U.N. Security Council sanctions against Iran may seem to be in the spirit of internationalist cooperation. But up close it looks more like an attempt to further Bush's commitment to regime change and domination of the Persian Gulf — the very policies that may be driving Iran's uranium-enrichment program. As long as the United States refuses to talk with Tehran about nuclear proliferation or to provide it with the security reassurances it needs, the White House sabotages the multilateral approach it now says it wants to champion.

The White House's handling of Russia is further evidence of cynical internationalism. Putin's Russia may have become a semi-authoritarian state, but that's no reason to disregard Russia's legitimate concerns. Washington plans to install antimissile bases in Poland and the Czech Republic, on top of its earlier expansion of NATO into former Soviet republics and the buildup of U.S. bases in Central Asia. As we warned in these pages a year ago, this is an open invitation to a new cold war in Europe. Bush is rushing to deploy a technology that does not work against a threat that does not exist, all the while destroying what remains of arms control and disarmament. Russia's help is critical to resolving regional conflicts, stopping the spread of weapons of mass destruction and combating terrorism. But this matters little to the Bush Administration.

Intended to demonstrate "American leadership around the world," Bush's feint at internationalism only further exposes how deeply entrenched he is in unilateralism and U.S. exceptionalism. Such "diplomacy" stands alongside Abu Ghraib and Guantánamo as hallmarks of America's eroding global leadership.
By the editors of The Nation
Reprinted with permission from the The Nation