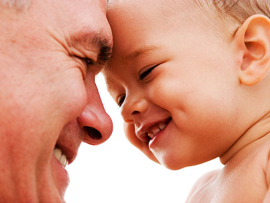 Dads, listen up: Your diet matters too when it comes to your newborn.

What a father eats before his child is conceived may influence the chance a baby will be born with a birth defect, a new study suggests. Much of the focus on how diet relates to birth has been done on moms.

"Our research suggests that fathers need to think about what they put in their mouths, what they smoke and what they drink and remember they are caretakers of generations to come," Sarah Kimmins, a research at McGill University in Toronto, said in a press release.

About one out of 33 children are born with birth defects, according to the Centers for Disease Control and Prevention.

The researchers worked with mice, paying attention to mice offspring who had fathers with low levels of vitamin B9 in their diet. The vitamin, which is also known as folate, is found in green leafy vegetables, cereals, fruit and meats. Previous research has shown that folate is important in preventing miscarriages and birth defects, and moms-to-be have been encouraged to chow down on items that are high in folate content.

Birth defects in the folate-deficient group included severe skeletal abnormalities, both in the head and face area as well as the spine. The mice also had abnormal breast bones and placental development, and some had fluid build-up in the spine. There were also limb, muscle and bone defects where the bone did not harden correctly. Fingers and toes also were not fully developed.

In the folate-sufficient group, the abnormal mice had defects of less concern including one of the offspring being a “runt” and skin discoloration.

They also found that male mice with a folate deficiency had lower rates of getting female mice pregnant (52.38 percent) compared to those who had enough folate (85 percent). However, both groups has similar mating behavior.

The researches believe there there are areas of the sperm epigenome, which is responsible for keeping track of DNA and histone protein alterations, that are affected by diet.

The epigenome is activated when different aspects of the person’s environment change, including what they eat. The change in consumption behavior is recorded in what is called the epigenome map, which is like a rubric that determines which genes are turned off and on. That can affect the development of offspring, their metabolism levels and what diseases they have.

Kimmis, however, told the Canadian Press that this research doesn’t mean that me should rush out to buy folate suppliments.

"I wouldn't go so far as to tell guys you need to start taking a folate supplement because we don't know what the right dose is, we don't know how it affects the human sperm genome," said Kimmins. "But I think we can say let's start paying attention to a male's preconception health."