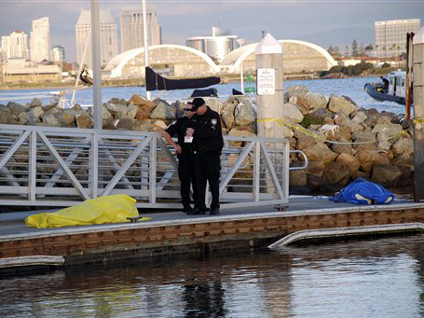 SAN DIEGO - A father and son died when a sailboat carrying 10 people on an excursion organized for people with special needs capsized in calm water in San Diego Bay, authorities said Monday.

Eight other people who were thrown into the water were injured. Among them were two young adults with undisclosed special needs, and a 10-year-old girl and an 11-year-old boy who were wearing life jackets, authorities said.

Investigators were still determining how many others were wearing life vests. The cause of the mishap also remained under investigation.

The people on the 26-foot boat included seven members of one family and two member of another, along with the driver of the craft.

The excursion was organized by an unidentified Indiana-based group that provides sailing trips for people with disabilities, authorities said.

The accident occurred near a buoy marking the way from a protected inlet to the channel of the bay.

There were no indications of a collision with another craft. The capsized boat had a retractable keel, but it was not known what position it was in during the mishap, Bolduc said.

A boat that size should hold six people maximum, but with 10 aboard, there would be scant room for everyone to sit down, said Chris Tucker, owner of SailTime Channel Islands in Oxnard.

"With that many people, if four people were told to sit over there and the other people got up, that would be enough instability right there," he said. "I'm amazed they didn't sink right where they all got on. That's just overloading the boat."

The eight injured people were taken to hospitals. The children were released after being treated briefly, San Diego Fire-Rescue spokesman Maurice Luque said.

None of the injuries was life-threatening, he said.

A witness said the rescue scene was chaotic.

"I couldn't see the boat. I just saw them pulling people onto the launch, doing CPR, and a lot of people screaming and yelling," witness Ty Alicot told the San Diego Union-Tribune. "It's pretty hard to turn over a sailboat that big."

Investigators removed the boat from the water and hauled it to the boatyard to examine it, Harbor Police Cpl. Victor Banuelos said.

Harbor Police officers were at the boat within five minutes after a Navy vessel reported it had capsized, officials said.