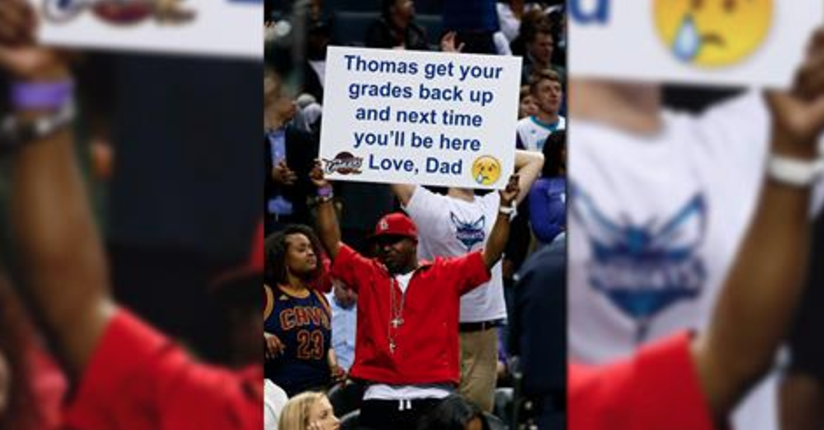 A mystery man is getting a lot of attention for the hilarious, yet ruthless sign he crafted for the Cleveland Cavaliers-Charlotte Hornets game Friday night at the Spectrum Center in Charlotte.

His sign didn’t target any of the players. Instead, it focused on his son, Thomas.

The smiling man, who has yet to be identified, proudly held up a sign trolling his son for getting bad grades.

“Thomas get your grades back up and next time you’ll be here. Love, Dad,” read the sign, complete with a tearful emoji and Cavs logo.

The brutally honest poster, which appears to have been professionally printed, earned the man the title, “Father of the year,” according to the internet at least.

USA TODAY Sports Images photographer Jeremy Brevard first captured the photo at the game. It went viral with more than 195,000 likes after ESPN shared it on Instagram.

But it didn’t take long for social media users to snap their own pictures and take screenshots of the jumbotron after it aired on ESPN before halftime.

Some called it a “parenting win”:

Others shared their own words of wisdom to Thomas:

However, some criticized the dad for publicly calling out his son:

While some people disagreed with the dad’s unusual parenting method, most agreed that Thomas should still hit the books. After all, with Cleveland’s close 112-105 victory, he certainly missed an exciting game.

Unfortunately, it doesn’t look like Thomas totally got the message.

It appears his dad made a second appearance at the Houston Rockets-Oklahoma City Thunder game Sunday, and he had a new message this time.

“Thomas can you hear me now? Student then athlete son. In that order. Love, dad,” the sign read.