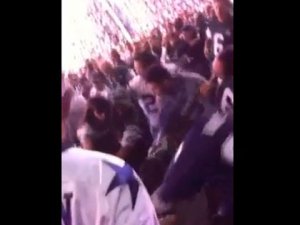 Leroy McKelvey of Moncks Corner, S.C., reportedly a diehard Cowboys fan, was charged with three counts of aggravated assault and two weapons counts after the tussle with three other people, including a marine, police say.

The New York Daily News reports that Charlamange Tha God, who also attended the game but did not sit with McKelvey, defended his father's actions, saying, "He got jumped by Jets fans when the Cowboys were leading by two touchdowns, so he was just defending himself. He shouldn't have had a Taser on him. But I really feel he took a risk because he felt threatened."

Only last week, New York Jets Head Coach Rex Ryan joked that fans shouldn't wear their Cowboy gear to Sunday's game, according to CBS affiliate WCBS. "It's probably not recommended that you wear Cowboys stuff, I would think," he reportedly said.

Ryan's comments were criticized heavily by WFAN's Mike Francesa on Thursday, particularly in light of recent fan violence at Candlestick Park in San Francisco and Dodger Stadium in Los Angeles.

McKelvey reportedly wore a Cowboys' hat and jersey to the game and has tattoos of Cowboy stars on his shoulder and arm.

However, the Daily News reports that, according to a source with knowledge of the situation, the brawl actually began because McKelvey and his entourage didn't stand during the national anthem. They also allegedly spoke during "Taps" and "Amazing Grace,"  which caused the Marine to get angry.

"Tha God" said McKelvey is a Jehovah's Witness and doesn't believe in standing for the anthem, the Daily News reports.

According to the paper, witnesses said the irritated Marine wouldn't let McKelvey pass to use the bathroom at halftime. That's when they said McKelvey used the taser.

The website Deadspin posted a cellphone video Monday of the fight.  According to WCBS, one fan on the video can be heard saying, "How did he get in here with that thing?"

There was an increased security presence at the game on the 10th anniversary of the Sept. 11, 2001 attacks, and Lamping said normal procedures for pat downs were "in effect at all entry gates."

The 59-year-old McKelvey was taken to the Bergen County Jail where bail was set at $22,500. It was not known if he had retained an attorney.

Meanwhile, MetLife Stadium CEO Mark Lamping said no one was seriously hurt in the incident.