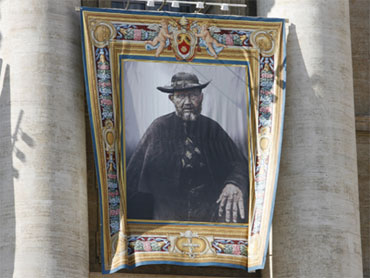 Pope Benedict XVI canonized five new saints Sunday, including a 19th century priest whose work with leprosy patients on a Hawaiian island has been hailed by U.S. President Barack Obama as inspiring those helping AIDS sufferers in today's world.

Among the pilgrims packing St. Peter's Basilica was Hawaii resident Audrey Toguchi, an 80-year-old retired teacher whose recovery from lung cancer a decade ago was called miraculous by the Vatican.

She had prayed to Belgium-born Jozef De Veuster, more commonly known as Father Damien, who himself died from leprosy in 1889 after contracting the disease while working with leprosy patients who were living in isolation on Molokai island.

Toguchi and her doctor, Walter Chang, joined a procession of faithful bringing relics of the new saints to Benedict at the central altar of the basilica.

The pontiff said the newly-canonized had given of themselves totally without "calculation or personal gain."

"Their perfection, in the logic of a faith that is humanly incomprehensible at times, consists in no longer placing themselves at the center, but choosing to go against the flow and live according to the Gospel," Benedict said in his homily.

Mr. Obama, who was born and spent part of his childhood in Hawaii, has said he remembers stories about Damien caring for people suffering from leprosy, also known as Hansen's disease, and its stigma.

In a message for the canonization, President Obama noted that millions worldwide suffer from disease, especially HIV/AIDS, and urged people to follow Damien's example by "answering the urgent call to heal and care for the sick."

Those with the disease, which can result in disfigurement, had been ostracized for centuries by societies and even families. Two leprosy patients participated in one of the basilica processions.

"The way leprosy was perceived then is how AIDS is perceived today" by many people, said Gail Miller, a pilgrim from Auburn Hills, Mich. Her parish church, St. Damien of Molokai, in Pontiac, Mich., became the first U.S. church to be named in the saint's honor.

Benedict praised the missionary, saying that "not without fear and repugnance, he chose to go to Molokai to serve the lepers who were there, abandoned by all," exposed himself to leprosy, and "felt at home with them."

A Honolulu pilgrim, Gloria Rodrigues, said she saw a connection between Damien and the AIDS problem today. "He was a servant of the outcast and should be an inspiration for us today to do as he did," said Rodrigues, who added she had relatives with leprosy who had been cared for on Molokai, although years after Damien's work there.

After the ceremony, the pope came out on the basilica's central balcony to greet some 40,000 faithful in the square. Speaking in French, he urged people to pray and help those involved in the battle against leprosy and "other forms of leprosy caused by lack of love or cowardliness."

Another new saint is Zygmunt Szcezesny Felinski, a 19th century Polish bishop who defended the Catholic faith during the years of the Russian annexation, which had led to the shutdown of Polish churches. 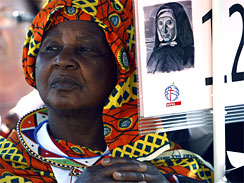 (AP Photo/Pier Paolo Cito)
Two Spaniards were honored: Francisco Coll y Guitart, who founded an order of Dominicans in the 19th century; and Rafael Arniaz Baron, who renounced an affluent lifestyle at age 22 to live a humble life in a strict monastery and dedicate himself to prayer.

The fifth new saint is Jeanne Jugan, a Frenchwoman described by Vatican Radio as an "authentic Mother Teresa ahead of her time."

(Left: A pilgrim in St. Peter's Square is seen next to an image of Jeanne Jugan during a canonization ceremony at the Vatican Sunday, Oct. 11, 2009.)

A nun, she helped found the Little Sisters of the Poor, which today runs homes for indigent elderly worldwide. She died in 1879.
By Associated Press Writer Frances D'Emilio; AP reporter Daniela Petroff contributed to this report