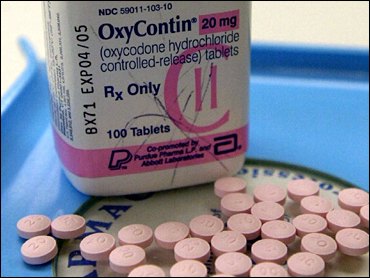 (CBS/AP) Deaths from overdoses of prescription painkillers have more than tripled over a decade, according to a new report from the CDC.

In 2008, drugs like OxyContin, Vicodin and methadone claimed almost 5,000 lives, including that of actor Heath Ledger. That's more than three times the 4,000 deaths from narcotics in 1999.

The painkillers "are meant to help people who have severe pain," said CDC administrator Dr. Thomas Frieden. "They are, however, highly addictive."

Nearly 5 percent of Americans age 12 and older said they had abused painkillers in the past year, using them without a prescription or just for the high, according to the report.

The overdose deaths reflect the spike in the number of narcotic painkillers prescribed every year - enough to give every American a one-month supply, Frieden said.

States oversee prescription practices and can rigorously monitor prescriptions and crack down on so-called  "pill mills" and "doctor shopping" by patients, Frieden said, adding that doctors should limit prescriptions - giving only a three-day supply for acute pain, for example - and look for alternative treatments.

"For chronic pain, narcotics should be the last resort," he added.

A federal drug plan announced this year calls for state programs to track prescriptions. All but two states - Missouri and New Hampshire - have approved them, said Kerlikowske. But a number of states don't have them in place yet or doctors aren't using them enough to check on their patients' past prescriptions, he said.

"America's prescription drug abuse epidemic is not a problem that's going to be solved overnight, but at the same time, we're not powerless," said Kerlikowske, who urged parents to get rid of unneeded or expired painkillers so they aren't misused.

Some states are taking action. Earlier this month, a doctor in California was sentenced to prison for illegally selling tens of thousands of prescriptions for painkillers and sedatives. Ohio now requires state licensing of pain clinics and limits the number of pills that can be dispensed at clinics. Florida also has cracked down on pill mills.

Overall, there were 36,450 fatal overdoses in 2008, including accidental cases and suicides involving illegal drugs like heroin and cocaine along with prescription medicines. That's the year Ledger died from an accidental overdose of painkillers and sedatives. A few months later, a 12-year-old girl from suburban New York overdosed on methadone she bought from a 15-year-old boy.

Narcotics also played a role in the recent deaths of a 27-year-old model at the mansion of an Anheuser-Busch heir and of former hockey player Derek Boogaard.

The report noted that fatal overdoses are more likely in men, middle-aged adults and whites and American Indians - and that sales of prescription painkillers are highest in the Southeast and Northwest.

Which states are especially hard hit by the epidemic? Click here to find out.