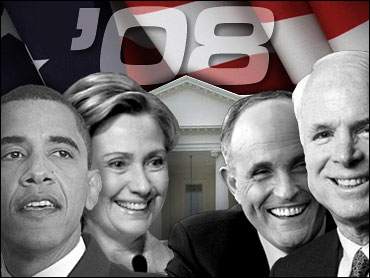 
Several weeks ago I was talking presidential politics with a friend who writes a column on local issues at a big city newspaper. He thought there was one obvious story that hadn't been written because it was just too politically incorrect.

The story was that each of the six major candidates (Fred Thompson wasn't in yet) had a fatal flaw by the measures of prior campaigns and elections. And mostly those flaws involve the prejudices or presumed prejudices of American voters.

Hillary Clinton is a woman. In past elections that would have be enough to make her the longest of the long shots. This year she is the crowned favorite.

Barack Obama is not only black, he has a very foreign-sounding name. He is also unusually inexperienced for a top-tier candidate.

Mitt Romney is a Mormon.

Rudy Giuliani is Italian American and his name sounds it. He has also been divorced twice. In 1992, it was absolute conventional wisdom that "no one named Mario" could be elected president of the United States. Mario Cuomo chose not to run. Giuliani appears to be the Republican frontrunner.

John Edwards does not fit tidily into the pattern, nor does John McCain. Edwards is strongest of these six candidates on the "fatal flaw-o-meter." He, too, is thin on experience. And in modern history, no vice presidential nominee who didn't win the general election ever became president later. For more on that, think back to Joe Lieberman, Jack Kemp, Lloyd Bentsen, Geraldine Ferraro, Bob Dole, Sargent Shriver and Edmund Muskie. Only Dole got even his party's nomination.

Three things make McCain a long shot by historical yardsticks. He is old, even older than Ronald Reagan was in 1980. The party's base clearly dislikes him. And he's already lost one run at the nomination in an open field. So these are three lethal, if not fatal, flaws. At this writing, they are taking a toll and McCain is wounded and fighting gangrene.

Thompson also looks okay on the flaw-o-meter. He looks better, of course, because he's coming in late, has avoided the catfights and opposition research teams and digging reporters have just set to work. But those are not flaws based on historical patterns. It is worth noting that Senators almost never become president.

Michael Bloomberg is Jewish. Every Jewish person I know except me thinks he cannot be elected president whether he's an independent, Democrat, Republican or Whig. I think he can.

I also think Obama can be president. But only if (and I don't quite know how to phrase this next part properly) he is a genuine charismatic leader, what Hegel called a World Historical Individual, the kind a country churns out every few generations. If he is such a man, few could know it now.

Semi-Conclusion One: This diverse and historically unique field may in itself be a great tribute to the march of brains and goodwill over prejudice in America.

Firm Conclusion Two: These historical aberrations mean that this is the most unpredictable election in modern times. Polls do not measure prejudice well. Predictions and the enterprise of predictive journalism are a waste of time this year. But massive time, money, brain power, energy and national attention span will be spent "covering" this election because campaigning has replaced governing as what people talk most about when discussing politics.

I am still trying to sort out a conversation I recently had and I am wary of discussing it publicly. A man I know has a slight mental disability that makes social interaction and intimate relationships extremely difficult for him. He is absolutely without guile. He is lonesome so when we talk, we really talk. His powers of memory are extraordinary and he knows many, many things about politics. He is incapable of prejudice. He also has an uncanny radar for personal sincerity and kindness. He is Catholic, with conservative parents, and, he likes who he likes. He does not like or trust any of the people running for president right now. He does like Bloomberg.

I trust this man's radar and in my reckoning it adds to the unpredictability of the election. More important, it reminds me of a deeper worry and brings me to Semi-Conclusion Three: America needs to grow up and figure out its problems are simply not going to be solved or even sensibly addressed primarily through leadership in this era of politics.

Current arrangements such as cannibalistic campaigns and a news media that eventually shrinks everyone who comes before the camera make enduring leadership next to impossible. More fundamentally, government and society are too big and complex to expect one leader to steer.

A president can – and this is crucial – cause enormous harm. We have learned that lesson well. I am not arguing that we take the presidency and presidential election too seriously. But it takes help from Congress for a president to cause harm in areas where executive power is strong, such as starting a war or appointing Supreme Court judges. It takes much, much more help from Congress, from the news media, from corporate America and from the institutions of special-interests to do good even in small ways.