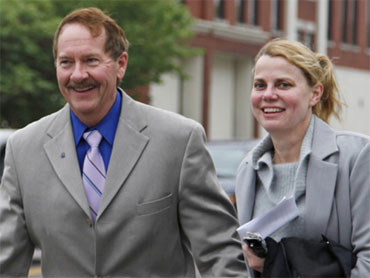 A pregnant Tennessee woman who enrolled in federally funded research in hopes of saving her soon-to-be-born son from getting AIDS died last year when doctors continued to give her an experimental drug regimen despite signs of liver failure, government memos say.

Family members of Joyce Ann Hafford say the 33-year-old HIV-positive woman died without ever holding her newborn boy. They also said they never were told the National Institutes of Health concluded the drug therapy likely caused her death.

The family first learned of NIH's conclusions when The Associated Press obtained copies of the case file this month. For the past year, they say they were left to believe Hafford, of Memphis, Tenn., died from AIDS complications but began pursuing litigation to learn more.

"They tried to make it sound like she was just sick. They never connected it to the drug," said Rubbie King, Hafford's sister.

"If it were the disease, solely the disease, and the complications associated with the disease, that would be more readily acceptable than her being administered medication that came with warnings that the medical community failed to get ... to her."

Documents show Hafford's case reverberated among the government's top scientists in Washington, who were monitoring reports of her declining health in late July 2003 as she lay on a respirator.

NIH officials quickly suspected the drug regimen because it included nevirapine, a drug known to cause liver problems, and the case eventually reached the nation's chief AIDS researcher.

"Ouch! Not much wwe (we) can do about dumd (dumb) docs," Dr. Edmund Tramont, NIH's AIDS Division chief, responded in an e-mail after his staff reported that doctors continued to administer the drugs nevirapine and Combivir to Hafford despite signs of liver failure.

Nevirapine is an antiretroviral AIDS drug used since the mid-1990s, and the government has warned since at least 2000 that it could cause lethal liver problems or rashes when taken in multiple doses over time.

NIH officials acknowledge that experimental drugs, most likely nevirapine, caused her death, and that keeping the family in the dark was inappropriate. But NIH usually leaves disclosures like that to the doctors who treated her, officials said.

"We feel horrible that something like this would happen to anyone in any circumstance," said Dr. H. Clifford Lane, NIH's No. 2 infectious disease specialist. "There are risks in research and we try to minimize them."

Jim Kyle, a lawyer representing Regional Medical Center in Memphis where Hafford died, declined comment because of the family's pending litigation. The doctors there referred a call seeking comment to NIH.

The study during which Hafford died recently led researchers to conclude that nevirapine poses risks when taken over time by certain pregnant women.

Lane said Hafford should have signed a 15-page, NIH-approved consent form at the start of the experiment specifically warning her of the risks of liver failure. The family says Hafford seemed unaware of the liver risks. They even kept the bottle of nevirapine showing it had no safety warnings.

"My daughter didn't know any of the warning signs," said Rubbie Malone, Hafford's mother and now caretaker of Hafford's new baby and older son. "She never got to hold her baby."

Lane confirmed the nevirapine bottle Hafford received likely wouldn't have had safety warnings because the experiment's rules called for the patient to be unaware of the exact drug effects to avoid patient influence on the test results. That means the consent form would have been her lone warning about potential liver problems, he said.

That 15-page, single-spaced consent form is chock full of complex medical terms like "hypersensitivity reactions" and "pharmacokinetic test." The warning about potential liver problems shows up on the sixth page, where it said liver inflammation was possible and "rarely may lead to severe and life threatening liver damage and death."

Hafford, who was HIV-positive but otherwise healthy, agreed to participate in the NIH-funded research project that provided her multiple doses of nevirapine, also known as Viramune, to protect her soon-to-be-born son, Sterling, from getting HIV at birth.

The project was an outgrowth of earlier research in Africa that concluded the drug could be taken in single doses safely to protect newborns half the time.

"She didn't want her baby to be born with HIV infection if it could be prevented at any cost," said King, her sister.

Hafford died Aug. 1, 2003, less than 72 hours after giving birth. Sterling was delivered prematurely by Caesarean section as his mother was dying. Though premature, he was spared from HIV and is healthy.

NIH's documents suggest Hafford's life might also have been spared if the drug had been stopped when the first liver problems showed up in her blood work two weeks before death.

Fishbein, who is seeking federal whistleblower protection after raising concerns about NIH's practices, told AP that Hafford's death is attributable to a bigger problem in government research.

"This is not just a clinical trial issue, this is a healthcare issue. The public expects that diagnostic test results are promptly evaluated and acted on, if need be," Fishbein said. "Sadly, this is but one example where an assessment was not done quickly and it cost this young mother her life."

NIH's official review determined the Memphis hospital failed to react to lab results that showed her liver failure was starting well before she died. "The site had identified that there was a delay in reviewing laboratory evaluations from the clinic visit the week before she presented with clinical hepatitis," an Aug. 15, 2003, report concluded.

The official investigative files cited "drug-induced hepatitis" of the liver as the cause of death.

As is routine after a research-related death, NIH ordered changes to the rules its researchers followed in the nevirapine studies to ensure the early detection of liver problems, the memos show.