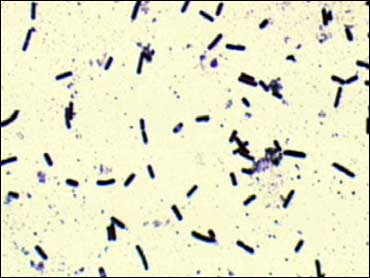 A deadly bacterial illness commonly seen in people on antibiotics appears to be growing more common — even in patients not taking such drugs, federal health officials warned Thursday.

The bacteria are Clostridium difficile, also known as C-diff. The germ is becoming a regular menace in hospitals and nursing homes, and last year it was blamed for 100 deaths over 18 months at a hospital in Quebec, Canada.

Recent cases in four states show it is appearing more often in healthy people who have not been admitted to health-care facilities or even taken antibiotics, according to Centers for Disease Control and Prevention.

"What exactly has made C-diff act up right now, we don't know," said Dr. L. Clifford McDonald, a CDC epidemiologist.

C-diff is found in the colon and can cause diarrhea and a more serious intestinal condition known as colitis. It is spread by spores in feces. But the spores are difficult to kill with conventional household cleaners.

C-diff has grown resistant to certain antibiotics that work against other colon bacteria. The result: When patients take those antibiotics, particularly clindamycin, competing bacteria die off and C-diff explodes.

California and NYC to require their workers to get COVID vaccine

The CDC report focused on 33 cases reported since 2003.

Twenty-three involved otherwise healthy people in the Philadelphia area who were not admitted to a hospital within three months of illness. Ten more were otherwise healthy pregnant women or women who had recently given birth who had had brief hospital stays. Those reports came from Pennsylvania, Ohio, New Jersey and New Hampshire.

One of the 33 patients died — a 31-year-old Pennsylvania woman who was 14 weeks pregnant with twins when she first went to the emergency room with symptoms. Despite treatment with antibiotics considered effective against C-diff, she lost the fetuses and then died.

She had been treated about three months earlier for a urinary tract infection with an antibiotic, trimethoprim-sulfamethoxazole. Ten others among the 33 patients had taken clindamycin.

But in eight of the 33 cases, patients said they had not taken any antibiotics within three months of the onset of symptoms.

Doctors watching for C-diff in hospitals and nursing home patients need to look for it in other patients as well, McDonald said. Patients need to be wary too. "If you have severe diarrhea, seek attention from a physician," he said.