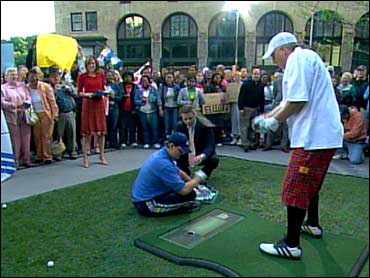 A man you could call the real "King of Swing" was back at it on The Early Show Wednesday.

David "Ogie" Ogron, a golf teaching pro from Laguna Beach, Calif., holds three world records, for the most balls hit in a 24-hour period, in 12 hours, and in one minute.

He set the minute mark of 83 during an appearance on The Early Show last June.

Ogron, who tours the country using his golf skills to raise money for charities, mainly children's cancer research, through his Miracle Golf Tour, was on the show's plaza again Wednesday with his ball placer, Scott "Speedy" McKinney who, it's estimated, puts a ball down for Ogron to hit every seven-tenths of a second.

On Wednesday, Ogron not only broke his own record, he shattered it, smashing a whopping 94 balls in sixty seconds.

To watch his go through his paces, .