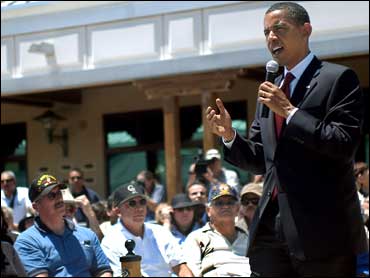 This column was written by James C. Capretta.

In describing the health-care plan of the presumptive Democratic nominee, Sen. Barack Obama, reporters invariably parrot the campaign line that he would build on, not replace, today's dominant employment-based system of private insurance. This is reassuring to those millions of voters who see the need for reform but are generally satisfied with the coverage they get today. Unfortunately, the Obama spin is nothing more than that. In truth, the Obama plan would sow the seeds of destruction for private health insurance, whether provided by employers or offered on the open market.

Fortunately, voters will not have to rely exclusively on information from a swooning press corps and the Obama propagandists for the duration of the coming campaign. There are, and will be, more rigorous assessments by outsiders of what the Obama plan would really mean, financially and otherwise. Indeed, a partial assessment of an Obama-like plan is already available - financed by an Obama ally, no less. Tellingly, even it points to the inescapable bottom line: Obama's plan would put the country on an irreversible fast-track to government-run health care for everyone.

The Commonwealth Fund, a New York-based philanthropy, has a well-deserved reputation as a very deep pocket for left-leaning health-policy initiatives and research. Chances are, if a new study supports an expanded government role in health care, Commonwealth Fund money made it happen.

Recently, three Commonwealth executives - Cathy Schoen, Karen Davis, and Sara R. Collins - published a proposal to rework health-insurance arrangements in the United States. The plan is of special interest because it is indistinguishable from the Obama plan in its basic design.

First, the Commonwealth executives, like Obama, would impose so-called "play or pay" on America's employers. All U.S. businesses would either have to organize coverage for their workers and finance a portion of the premium, or pay a tax - seven percent of their payroll - to the federal government to offset the costs of enrolling workers in government-organized insurance.

Second, they, like Obama, would have the federal government establish a new national "insurance exchange" for small-business workers and individuals who don't get coverage through a job. The government would impose heavy regulations on participating insurers, including mandatory benefits and limits on the range of premiums they could charge to different enrollees.

Third, and most importantly, both the Commonwealth executives and Obama want to initiate, as an additional option in the insurance exchange, a new publicly run insurance plan, modeled on Medicare. With this option, the federal government would act as the insurer, collecting premiums from enrollees to cover the cost of paying health-care claims on their behalf.

This public-insurance option is the crucial pivot upon which these plans, and others like them, tilt toward a government takeover. The Commonwealth executives make it clear that the new publicly run insurance would import Medicare's arcane and elaborate rules for paying hospitals, physicians, and other providers. These payment rates are not negotiated with the suppliers of services; they are imposed by the federal bureaucracy on a take-it-or-leave-it basis. There is no efficiency gain or improvement in the quality of care. Rather, the government simply fixes payments at below-market rates. In time, such actions always lead to constrained supply and frustrated demand.

Private insurers, of course, also try to control costs, using whatever levers are at their disposal. They can't dictate fees for doctors and hospitals, but they can try to steer enrollees to a limited number of preferred providers, to whom they promise volume in exchange for lower prices. Many also try to manage care for the most expensive, chronically ill cases, sometimes to the great frustration of patients and doctors. And they usually require patients to pay at least some of every bill to provide a financial incentive for thinking twice before using services.
But even the most aggressive, cost-cutting insurers are no match for a government determined to use its sovereign power to set prices and shift costs to others. An analysis accompanying the Commonwealth executives' plan, produced by consultants at The Lewin Group, estimates that the public-insurance option could charge premiums 30 percent below what an average employer plan cost in 2007. Such a premium differential would have dramatic implications in the marketplace. Lewin estimates that, of the 60 million small-business workers and others getting their insurance through the national "insurance exchange," 40 million would choose to enroll in the new public insurance option because of its lower cost. This would effectively double the size of the population covered under Medicare payment rules. The Commonwealth executives also propose expanded enrollment in Medicaid and the State Children's Health Insurance Program (SCHIP), adding another 12 million Americans to public programs.

Once in place, the momentum toward the new public-insurance option would be impossible to reverse. Large employers might, for a time, continue playing rather than paying as a service to their workers. But with each passing year, the premium differential between private plans and the public option would grow and induce additional migration from private to public insurance, which, in turn, would increase the government's ability to impose lower prices, further widening the premium gap. It would be just a matter of time before all employers abandoned the effort to compete with a monolithic government-run plan.

If the only consequence of such a shift in power were lower premiums, many analysts and ordinary voters would cheer on the change. But, of course, government control brings government bureaucracy, inefficiency, and heavy handedness. The tragedy is that price controls are only effective if they control and limit the supply of services. In time, that means waiting lists and other barriers to accessing care, along with skyrocketing costs to the taxpayer. That's the true bottom line of the Obama plan.
By James C. Capretta
Reprinted with permission from National Review Online