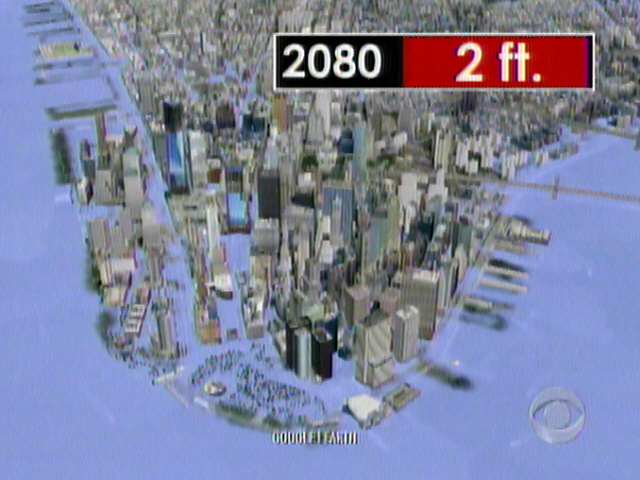 (CBS News) JERSEY CITY, N.J. - Forget the heat -- the East Coast could be facing an even bigger environmental problem in the years to come, according to a study this week by the U.S. Geological Survey: rising waters.

In coastal Norfolk, Va., Ed and Julie Guyton hate to think about the constant threat of flooding they face.

"We've had three floods from tidal surges, storms that entered into our home in the first floor at least 7 inches up to 10 inches," Ed Guyton said.

Since 1990, sea levels have gone up about two inches around the world. But in Norfolk, it's more than double that: 4.8 inches.

"It's scary, it's petrifying. Are you kidding?" Guyton said. "You can't think about it."

It's not just Norfolk but a 600-mile stretch of the Atlantic coast from North Carolina to Boston that's now seeing sea levels rise much faster than the rest of the world. Philadelphia's up 3.7 inches, New York 2.8 inches.

"Sea level rise is like a creeping tsunami," he said. "It goes almost imperceptibly year by year, but it's gaining in tremendous amount of strength and it is going to have an enormous impact on our coast."

It would change the face of the city.

It's left some feeling hopeless.

"There is really not much that you can do," said Jerry Healy, the mayor of Jersey City, right across the Hudson River from Manhattan.

Thirty-five percent of Jersey City is two to three feet below sea level right now. First floors of new buildings must be at least feet above the sidewalk.

Could Jersey City exist with the water levels being another three or four feet higher?

"It could exist, but not like we are doing business today," Healy said.

The best guess is rising sea levels could cost the major cities on the coast at least $300 billion by 2050.