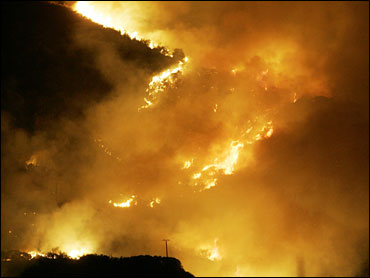 A wind-whipped brush fire quickly doubled in size early Thursday to more than 7,000 acres, destroying at least one home and prompting evacuations from a ridge of flames that was visible for miles.

Fanned by the Santa Ana winds, the blaze burned to the edge of a number of multimillion-dollar homes that abut rural, picturesque hillsides in the San Fernando Valley. Several communities were evacuated.

"I couldn't get the birds, I couldn't get clothes, I couldn't get nothing, it just came around," Feo said. "It caught fire while I was inside unloading as much stuff as I could. I could see the flames behind the house and then hear the windows cracking."

Late Wednesday night, bright red flames 10 to 15 feet high stretched several miles across much of the western edge of the valley, and CBS News Correspondent Vince Gonzalez reports helicopters continued dropping water on the flames through the night.

"It's pretty hard to deal with when it's dry brush and dry fuel. There's not a lot you can do to stop it," said Paul Shakstad of the Los Angeles Fire Department.

Los Angeles County Fire Department spokesman Ron Haralson said more than 700 firefighters were on the scene. One firefighter was struck on the head by a 40-pound boulder and was taken to a hospital, Capt. Carlos Calvillo said Wednesday.

The fire, the first of the season, was only 5 percent contained early Thursday, authorities said.

Feo knows he was lucky.

"My mom's baby grand piano, all our pictures, all our clothes, all our records, but we got out — thank God, we got out," Feo said.

The Riverside County Fire Department reported that firefighters have contained 25 percent of an 1160-acre in San Timoteo Canyon between Redlands and Moreno Valley, Calif. The blaze destroyed 90,000 chickens at a chicken ranch.

So far this year, wildfires have charred 8.16 million acres nationwide, compared with 7.74 million acres at the same time last year, according to the National Interagency Fire Center.