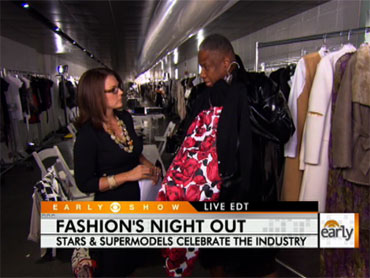 Looking to get a jumpstart on some of the hottest fall fashion trends, but need some direction?

The world's biggest names in fashion, 150 models, including Naomi Campbell, Gisele Bündchen and Adriana Lima will be strutting their stuff at Lincoln Center in New York City -- where in less than 12 hours the Fashion's Night Out initiative will officially begin with a fashion show of epic proportion.

If you don't have a seat to tonight's big fashion show, but want to see all the action here in Lincoln Center, just log on Fashion's Night Out on CBS.com beginning at 7p.m. eastern to watch a live webcast, hosted by none other than André Leon Talley.

And for a special behind the scenes look at fashion's biggest night, and a recap of the star-studded fashion show, tune in next Tuesday, Sept. 14 at 10p.m., 9p.m. for a prime time special right here on CBS.

Look at Vogue's best picks for this season: