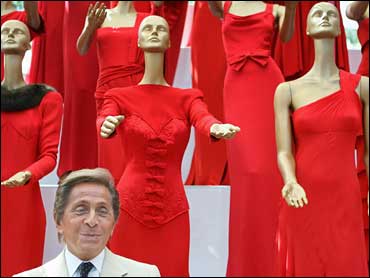 After 45 years of making gowns that command the attention for a grand entrance, Valentino is making his grand exit from the fashion world.

Valentino, whose couture gowns have graced royalty, Hollywood stars and the international jet set for 45 years, announced on Tuesday he was stepping down as head designer of the fashion house that bears his name.

In a statement, Valentino said he would complete his work in January, after showing his ready-to-wear collection in Paris in October and his couture collection in January.

The 75-year-old said he had decided the time was right after he celebrated 45 years in the fashion world with a three-day, star-studded extravaganza in Rome earlier this summer.

At the GQ Awards on Tuesday evening, model Elle McPherson told the AP that Valentino is the leader of his industry.

"Valentino is the king. He's the king of what he does. I have an incredible amount of respect for him," she said.

AP Entertainment broke the news to a surprised Naomi Campbell.

"It's sad to see Valentino go. I don't know, I didn't know. I'm going to miss him, dearly. I worked for him since I was 16 and he's amazing what he did all those dresses for Elizabeth Taylor and all her movies and stuff," Campbell said.

But Welsh designer, Julien Macdonald said perhaps it was time for the veteran fashion king to step down.

"You know Valentino is like a 70-year old guy of great fame; we love him, but you've got to look forward to the future," Macdonald said.

Valentino, born Valentino Garavani in 1932 in the northern Italian town of Voghera, began his career in Paris alongside Jean Desses and later Guy Laroche, moving to Rome in the early '60s to open his own fashion house.

He quickly became the maestro of Italian couture, counting Elizabeth Taylor and Jacqueline Kennedy Onassis among his customers, but he also worked to bring fashion to a wider public.

"He's been ludicrously influential in the world of fashion and it's very hard to imagine him not making these beautiful dresses season after season." Liz Hurley told AP Entertainment. "I've had a great deal of pleasure from wearing his clothes," she added.

In the '70s and '80s Valentino was the first Italian designer to launch ready-to-wear collection for men and women.

In 1982 the Metropolitan Museum of Art in New York opened its doors to fashion by hosting a Valentino show.

Word of his retirement, first reported Tuesday by Women's Wear Daily, had long been anticipated.

The designer, alongside longtime partner Giancarlo Giammetti, set the stage for his exit by selling the business side of the house, while remaining in control of the atelier.

After first selling to the publicly traded Marzotto group, Valentino was bought again this year by the Permira private equity fund as the global private equity boom found its way to the fashion industry.

In the biggest deal at the time, Permira paid $1.06 billion for a controlling stake in Valentino in a deal that valued the fashion house at $3.52 billion.

Valentino said he was certain the Valentino house would change, but that he hoped that his team "would know how to continue my work in a way that would make me proud."

As for his own plans, Valentino said his future would be full of new commitments, some linked to fashion including creating and supporting institutions that promote the study of design and preserve the art of fashion.

"I think that would be the best way to continue this marvelous adventure that I have had the privilege of living," he said.